Chandigarh: The Aam Adami Party (AAP) here on Saturday raised the issue of awful situation of ‘misrule’ in state. Addressing the media at Punjab Bhawan, Chandigarh AAP MLA and leader of opposition in vidhan sabha, Adv. H.S. Phoolka along with MLAs Aman Arora, Pirmal Singh Dhaula, Kulwant Singh Pandori, Jagtar Singh Hissowal and Amarjit Singh Sandhoa said that nothing has changed with the change of guard in state and Congress leaders are behaving worse than Badal Dal. 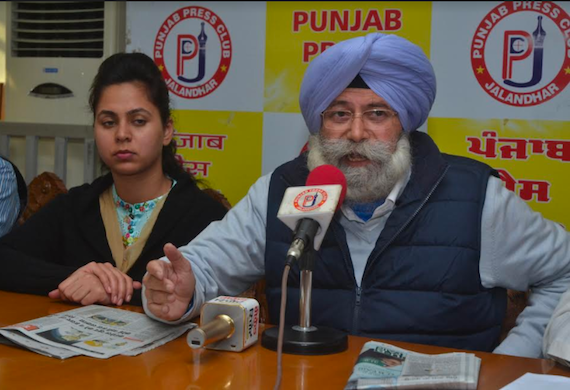 Quoting an incident of Congress MLA Ramanjit Sikki threatening a police officer to work as per the directions of Congress leaders or to be ready for consequences, MLA Aman Arora said that the act will worsen the moral of police in the state. He said that congress is adopting Akali Dal (Badal)  agenda of political vendetta.

MLA Pirmal Singh Dhaula raised the issue of Congress’s poll promise of providing jobs to youth but shying away from fulfilling it after the formation of government. He said that Congress leaders including Parneet Kaur, Rajinder Kaur Bhathal, Sadhu Singh Dharamsot and others assured the agitating linemen to employee them after congress comes into power but has denied to do so after attaining power. He asked the government to redraft the employment policy to provide jobs to the youth of state.

The issue of widow and old age pension was flagged by the AAP MLAs. Congress promised to raise the pension to 2000 from 500 in its manifesto but has shown its inability to do so giving reason of bad state of exchequer. Aman Arora said that the government has money to give salaries to the army of advisers but not for the old aged and widows.

Raising the issue of Congress leaders illegally grabbing the truck unions in the state, MLA Jagtar Hissowal said that no election is being held to elect the governing body of truck unions. He said that his party will oppose the undemocratic way of electing presidents.