AAP to start statewide agitation against corrupt practices of government

Chandigarh: Aam Aadmi Party on Sunday asked Punjab chief minister Amarinder Singh and state Congress chief Sunil Jakhar to explain why Congress government is running away from scrapping the Power Purchase Agreements made by previous Badal government if they find these agreements faulty.

In a written statement AAP state president Bhagwant Mann, LoP Sukhpal Singh Khaira and state co-president Aman Arora said that Congress has made a false promise with the people of state by adding a clause in their election manifesto that all these PPAs done by Sukhbir Badal and Bikram Majithia will be made fresh. But now, after the formation of government in state, Congress is shying away from taking any action in this regard. The leaders said that the reason behind this U-Turn is an agreement between Amarinder and Sukhbir Badal-Bikram Majitha to share the money got from these companies. 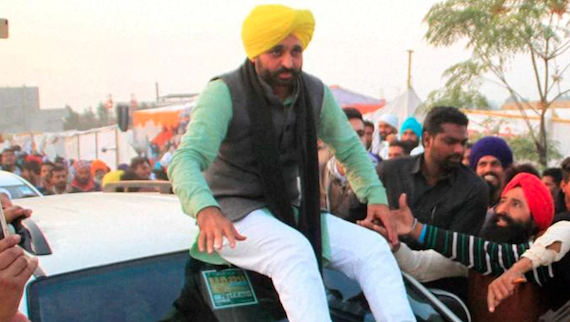 Reacting on the statement given by Sunil Jakhar that Badals are responsible for recent electricity fare hike, Mann said that everybody is known to the corruption done by Badals but people of state are more interested to know what actions the newly elected Congress government has taken in last 7 months to rectify the damage done by Akalis. He asked what is stopping Amarinder to take action against corrupt Akalis.

Sukhpal Khaira said that Congress party in its election manifesto had clearly written that all the agreements done by Badal government with private players will be scrapped and the government is committed to provide cheap electricity to the people. He said that after the formation of government, Amarinder rather than taking action against private players has preferred to shut down state owned power plants. He said that shutting of state owned power plants will affect the jobs of thousands of people working there.

Aman Arora said that Sunil Jakhar during a press conference has himself admitted that the government at present is paying Rs. 5.40 per unit to Talwandi Sabo thermal, Rs.8.70 p/u to Goindwal Sahib thermal and Rs. 3.40 p/u to Rajpura thermal as per the agreement done with these companies. The government is Rs. 3700 Crores to these companies as ‘Fixed Charge’ even if it doesn’t require electricity from these private companies. On the other hand government thermal plants are selling electricity to the government at the price of Rs. 1.32 p/u and Rs. 2.20 p/u. The leader asked the reason of paying higher amount to the private players than state owned thermals.

AAP demanded that the government must immediately scrap these agreements and make new deals for the welfare of the residents. The leaders demanded that an inquiry in this regard must be initiated and action should be taken against those responsible.

AAP has also warned the government that if it failed to take action in this regard, the party will start a statewide agitation against the corrupt practices of Congress govt. and the effigies of Amarinder along with Sunil Jakhar will be burnt throughout the state.