Fazilka/ Abohar: Abohar witnessed protests over past two days over the killing of rape accused Bheem (27), whose legs and arms were allegedly severed by workers of liquor baron and SAD (Badal) leader Shiv Lal Doda at his farmhouse on Friday, Dec. 11.

Meanwhile, Gurjant Singh, who had accompanied Bheem to the farmhouse at the time of incident and also sustained grievous injuries, is still critical and being treated at a private hospital in Amritsar.

India’s National SC Commission vice-chairman Raj Kumar Verka issued a notice to Fazilka SSP Inderjit Singh Bhatti on Sunday, asking him to arrest the culprits within three days. He clarified that if the police failed to nab the culprits within the given time, the commission would take strong action against police officials. Family members of the victims had approached Verka for seeking justice. 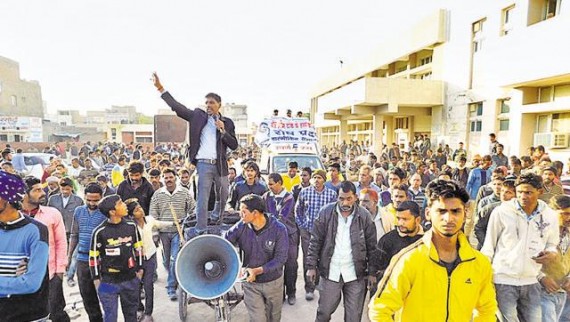 Meanwhile Bahujan Samaj Party (BSP) today said the state government is guilty of being a meek spectator to atrocities conducted on the backward community.
BSP supremo Mayawati said that ever since the BJP-Badal Dal coalition government has been formed in Punjab, atrocities on Dalits have increased.

There is no law and order in the state and it seems that there is rule of drug dealers, Mayawati alleged before media.

She said that the Punjab Government is just being a meek spectator and is not taking any action against the atrocities conducted towards the dalits.