New Delhi: Twenty-five years after the introduction of the Armed Forces Special Powers Act in Jammu and Kashmir, the law continues to feed a cycle of impunity for human rights violations, Amnesty International India said in a new report published today.

“5 July 2015 will mark 25 years since the AFSPA in effect came into force in Jammu and Kashmir. Till now, not a single member of the security forces deployed in the state has been tried for human rights violations in a civilian court. This lack of accountability has in turn facilitated other serious abuses,” said Minar Pimple, Senior Director of Global Operations at Amnesty International.

“The current Chief Minister of Jammu and Kashmir, Mufti Mohammed Sayeed, was the Union Minister for Home Affairs when the AFSPA was enacted by the Indian Parliament in 1990. He now has a historic opportunity to work to remove this oppressive law,” said Minar Pimple.

The report is based on in-depth research in Jammu and Kashmir, including interviews with 58 family members of victims of alleged human rights violations by security forces, Right to Information applications, examination of police and court records, and interviews with civil society groups, lawyers, and government officials.

The report reveals that the central government has denied permission, or ‘sanction’, to prosecute under section 7 of the AFSPA in every case brought against members of the army or paramilitary, or in a small number of cases, has kept the decision pending for years. It also documents a lack of transparency in the sanction process. 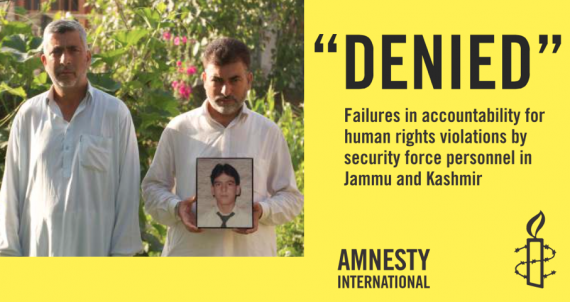 “Not a single family interviewed for the report had been informed by the authorities of the status or outcome of a sanction request in relation to their case,” said Divya Iyer, Research Manager at Amnesty International India.
Mohammad Amin Magray, uncle of 17-year-old Javaid Ahmad Magray, who was killed in April 2003 by security force personnel, told Amnesty International India, “If the Army knew they would be charged, and will have to go to court and be prosecuted, they will think ten times before they pull their triggers on an innocent…The AFSPA is a like a blank cheque from the government of India to kill innocents like my nephew”.

“Police and court records pertaining to nearly 100 cases of human rights violations filed by families of victims between 1990 and 2012 showed that the Jammu and Kashmir police often failed to register complaints or take action on registered complaints until they were compelled,” said Divya Iyer. “In some cases, army personnel have been reluctant or refused to cooperate with police investigations.”

The army has dismissed more than 96 per cent of all allegations of human rights violations against its personnel in Jammu & Kashmir as “false or baseless”. However the evidence for finding the majority of allegations false is not publicly available. Few details of the investigations or military trials conducted by the security forces are available to the public.

In a rare exception, in November 2014, the army had revealed that a court martial had convicted and sentenced to life imprisonment five soldiers for shooting and killing three men in a ‘fake encounter’ – a staged extrajudicial execution – in Machil, Jammu and Kashmir, in 2010.

“The convictions in the Machil case were a welcome measure. But for justice to be consistently delivered, security force personnel accused of human rights violations should be prosecuted in civilian courts,” said Divya Iyer.

“Impunity only breeds further violence and alienation, making it more difficult to combat abuses by armed groups.”
“The AFSPA should not be used to shield soldiers from prosecution any more. By bringing alleged perpetrators to justice, the Indian government can send a clear signal that nobody is above the law, and that every person’s right to equality and justice will be respected and protected.”