Chandigarh/ Anandpur Sahib: In his first press appearance after five Singh Sahib announced their controversial decision to grant pardon to Dera Sauda Sirsa chief, Takhat Kesgarh Sahib Jathedar Giani Mal Singh claimed that the decision to exonerate Dera chief was taken in larger interests of the Sikh nation. Jathedar reportedly agreed to interact with the press after journalists insisted to meet him in wake of yesterday’s assault in which Giani Mal Singh was attacked by a young paathi. It was suspected that the attack was triggered by anger against Jathedars for their controversial decision on dera Sauda chief.

Giani Mal Singh defended the decision and said that five Singh Sahib had taken the decision in larger interests of the Sikh nation. Speaking about the opposition to their decision, he said that some organizations were playing politics over the decision. 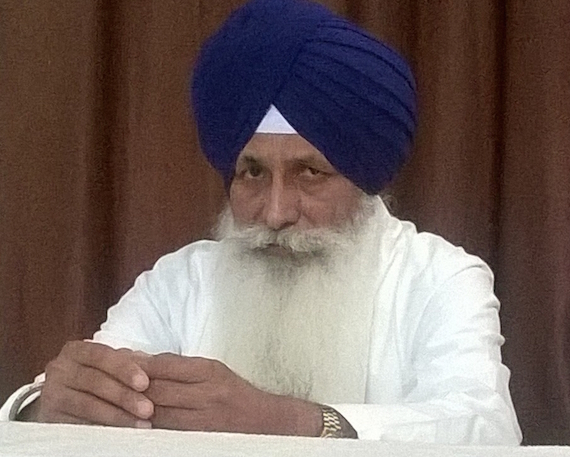 He claimed that the decision was taken to repair the torn social fabric of the state. He said that many Sikhs were suffering due to Dera controversy as there was loss of life in dera-Sikh clashes and many Sikhs were also facing police cases and jail sentences. He said that the five Singh Sahib had decided to exonerate Dera chief to end harassment of the Sikhs.

It may be recalled that Dera Sauda Sirsa chief Gurmeet Ram Rahim had indulged into blasphemous behaviour insulting pious Sikh traditions in 2007. In wake of widespread outrage against the Dera chief, Takhat Jatehdars had issued an edict against Dera chief. This 2007 Hukumnama was supported and followed by the Sikh sangat. But when Jathedars suddenly announced to exonerate dera chief last month, the move was strongly opposed by the Sikh organzations as well as the Sikh sangat.

Sikh organizations are demanding resignation of persons holding the positions of the Takhat Jathedars who took this decision and their by allegedly deceived the Sikh sangat.

Tough the Jathedars are backed on their decision by ruling Shiromani Akali Dal (Badal) and organizations under its control, such as SGPC and DSGMC, the Sikh sagant has widely rejected Jatehdars’ decision. Sikh Diaspora sections have called upon the Sikh sangat to boycott the Giani Gurbachan Singh, Gaini Mal Singh, Giani Gurbachan Singh and two other Jatehdars who had announced exoneration of Dera chief.