Faridkot, Punjab: After coming out of the Faridkot jail on October 14, Haryana Sikh Gurdwara Management Committee (Ad hoc) member Baba Baljit Singh Daduwal said the Punjab government tried to brand him as its biggest enemy and kept him behind bars even after the court granted him bail on October 7.

He said, “Badal is anti-Sikh and no one should believe him. I am not going to demand votes for any political party in Haryana elections”. 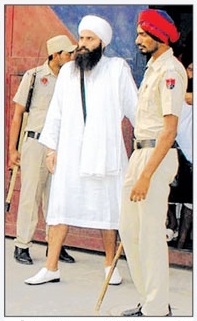 Baba Daduwal said HSGMC bill was no issue in Haryana polls but Badals unnecessarily raked it up. He said that Badals were only interested in their own lust and they have nothing to do with religion or Sikhs.

“I never indulged in politics but fearing my popularity, Badals kept me behind bars even after the high court had granted me bail. Badals were fearing that if I campaigned in Haryana, they will be exposed so he stopped me from coming out of jail,” he said.

“Whichever party comes to power in Haryana after the elections, it can’t disband HSGMC. It is a legally sound committee and no party will fight against it,” the HSGMC member said.

Daduwal was released from jail in the evening just hours before Haryana goes to polls. Though Daduwal was to be released on October 9 after the high court granted him bail, he was immediately rearrested. Daduwal’s family had accused the state government of intentionally keeping him away from campaigning in Haryana elections. Daduwal was expected to campaign against Shiromani Akali Dal and the Badals in the neighbouring state.