Chandigarh: In an open indication to pursue its Hindutva agenda with full force the Bhartiya Janta Party (BJP) has picked up controversial Hindutva propagandist Yogi Adityanath to head its government in Uttar Pradesh. An announcement by Hindutva political outfit in this regard put estoppel on all the speculations pertaining to the candidature for the CM’s post in the state. 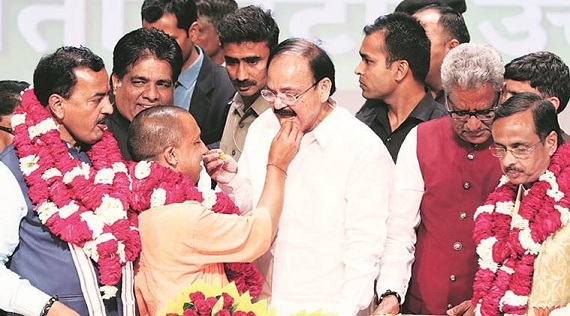 The 44-year-old saffron-clad head priest of the Gorakhpur Muth would have two deputy chief ministers, Keshav Prasad Maurya and Dinesh Sharma. A controversial five-time MP from Gorakhpur and a hardline Hindutva leader, Adityanath was elected the BJP legislature party leader at a meeting of the newly elected MLAs, held a week after the BJP won UP by a three-fourth majority.

In his first, brief interaction with the media after his surprise selection, Yogi Adityanath claimed to follow Prime Minister of India Narendra Modi’s ‘Sabka Saath, Sabka Vikas’ agenda, and strive for “good governance”. “I am confident the state will march on the path of development,” he purportedly said at Raj Bhavan, where he had gone to meet the Governor.

The union information & broadcasting minister M Venkaiah Naidu, who was the central observer for the election of the legislature party leader along with BJP general secretary Bhupendra Yadav, while addressing the media reportedly said that “Adityanath was a unanimous choice of the party’s 312 MLAs — and that Adityanath himself asked for the two deputies. By choosing Keshav Prasad Maurya, the BJP state chief, and Dinesh Sharma, who is the Lucknow Mayor, the BJP (while playing a casteist strategy) thas got itself a Thakur (Adityanath), an OBC (Maurya) and a Brahmin (Sharma) as the face of its government in the state. None of the three incidentally is a member of the UP Assembly.

Adityanath and the others will be sworn in at Lucknow’s Smriti Upvan on Sunday at 2.15 pm at a ceremony to be attended by Indian Prime Minister Modi and BJP president Amit Shah. He will be the 21st CM of UP.

Media repots suggest that Yogi Adityananad would pursue manyfold Hindutva agenda in the state, which would aim at polarising the society and strengthening the Hindutva fold.