Kotkapura: Punjab’s ruling party representatives including Mantar Singh Brar, Chief Parliamentary Secretary, and Kotkapura MLA, accompanied by senior Akali leaders and SGPC members yesterday visited the families of Shaheed Gurjeet Singh and Shaheed Krishan Bhagwan Singh at Sarawan and Niamiwala villages near Kapurthala. Ruling party leaders hand over “relief” of Rs 10 lakh each to both the families. The “relief” was reportedly extended by the SGPC, which is controlled by the Badal Dal.

Since the incident that took place at Behbal Kalan on October 14, today was the first visit of any ruling party leader to the affected families. 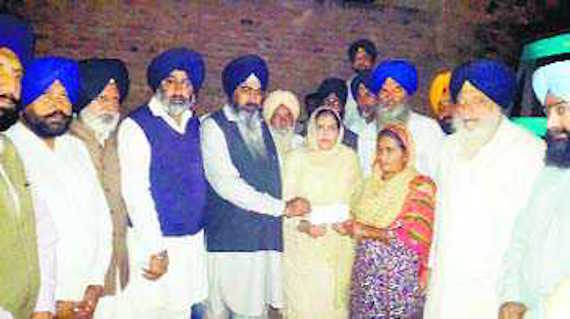 The visit of ruling party representatives were facilitated by the police force as fearing protests against the ruling party leaders the police reportedly detailed many Sikh leaders and activists.

Sukhdev Singh Baath, SGPC member from Jaitu, said both families were given Rs10 lakh each as relief from the SGPC. “We share our sympathy with the families. The SGPC had decided to give relief to the families a day before the state government announced Rs10 lakh for them,” he said.

The relief cheques were not handed over to the families owing to the volatile situation, he said.

As per information Punjab’s Deputy Chief Minister Sukhbir Badal will be visiting the victim families today.

It may be recalled here that Bhai Gurjeet Singh (Sarawan) and Bhai Krishan Bhagwan Singh (Niamiwala) were killed in Punjab police firing when a police party led by then Moga SSP Charanjeet Sharma had opened fire against the Sikh sangat on October 14. The Sikh sangat was holding protests against beadbi of Guru Granth Sahib.

It is notable that the police had earlier booked the Sikhs in this case alleging that the Sikhs had “attempted to murder” police personnel. An FIR no. 129/2015, PS Bajakhana, was registered in this regard but the case was later withdrawn by the police.

Under pressure from the Sikh sangat the Punjab government ordered registration of FIR related to police firing and killing of Bhai Krishan Bhagwan Singh and Bhai Gurjeet Singh. The Sikh Siyasat News (SSN) has obtained the copy of the FIR which reveals that the FIR was registered on October 21, 2015 on the report of SIT that was formed to investigate the incidents related to beadbi of Guru Granth Sahib at Bargari village.

The FIR says that the police party which opened fire on Sikh demonstrators was led by then Moga SSP Charanjeet Singh (Sharma). But no one is named as suspect in the FIR and it is registered against “unknown” persons.