Yangon, Myanmar: As per a community update by the United Sikhs, the US based NGO, on August 6, launched the Myanmar Flood Relief 2015 effort to provide aid and assistance to those affected by Cyclone Komen.

These torrential rains have impacted over one million individuals making it one of the worst flood emergencies that Myanmar has ever seen. Immediate humanitarian needs remain acute. In 6 days, 15 team members have provided 9 tonnes of aid to over 2,000 individuals in need. 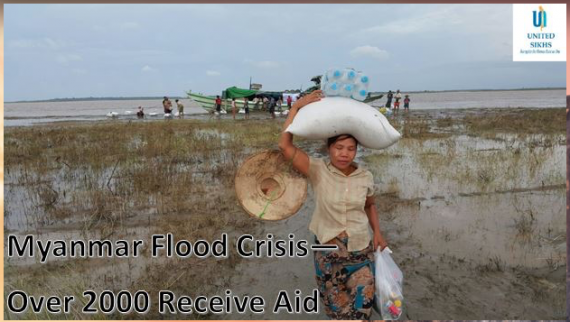 Natural disasters such as these often come with no warning, and require immediate mobilization. In order to react in time, we tapped into our funds to purchase food, water, and essential survival equipment for flood victims. For this reason, every donation made at this time counts more than ever.

After traveling 5 hours by truck and 2 hours by boat on Sunday, August 9th, our team reached the village of Sein Taung Gyi in Myanmar’s Delta region-one of the areas worst hit by floods. The village was 8 to 12 feet underwater, though residents had not received aid in almost 2 weeks. Upon arrival, our team distributed 5 tonnes of aid which included water, rice, canned fish, local tea pickle (lepeh), candles, lighters, cooking oil, salt, and cereal.

The United Sikhs’ relief team is currently delivering aid to an additional 1500 people in a village which took 5 hours by truck and 5 hours by boat to reach. Here, 150 cartons of water, nearly 4 tonnes of rice, and 600 cans of fish, salt, cooking oil, and lepeh will be distributed to families in need.

United Sikhs are privileged to be able to provide seva to those who need it most because of your support. Though many have been helped, there is a substantial amount of work left to be done. One local resident told United Sikhs that 200 houses are underwater in his village. Other homes are almost completely flooded, and residents are confined to upper levels. Water will not recede for weeks, and more villages are waiting for assistance.

“We are committed to making a difference in the lives of those who have been affected worst by the floods. Join us in our effort today”, said Untied Sikhs in a recently released update.

“We would like to extend our thanks to Jagjit Singh, Sydney Singh and their families for their undeterred support since 2008. A heartfelt gratitude to all the unsung heroes on the ground, the donors and volunteers, you make a difference in many lives”, the statement reads further.