As per initial reports available with the Sikh Siyasat News (SSN) two of 13 executive members opposed the proposal to dismiss the Panj Pyare while 11 members, including Karnail Singh Panjoli, endorsed the proposal.

The SGPC has been alleging that the Panj Pyare were just employees of the SGPC and they were given duty to conduct “Amrit Sanchar” at the Akal Takhat Sahib and they had no other role to play. 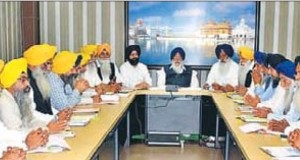 On the other hand the Panj Pyare have been maintaining that they had to step in to the issue of so-called apology to the Dera Sauda Sirsa chief Gurmeet Ram Rahim in wake of sentiments of the Panth. The decision to grant pardon to dera Sauda chief was rejected by the Sikh panth and even the Jathedars later withdraw their decision to pardon dera chief.

It may be recalled that the Panj Pyare were also put under suspension by the SGPC earlier also but they (Panj Pyare) had ignored the suspension saying that they were not answerable to any person or organization in their capacity as the “Panj Pyare” as along as they work under Guru’s guidance.

It is notable that one of the Panj Pyare, Bhai Major Singh, has already retired from his services. Other four Panj Pyare have been put under suspension.

The Panj Pyare are likely to announce their future course of action tomorrow.