Mumbai: Hindi film actor Akshay Kumar was reportedly injured while performing a stunt on the sets of his upcoming movie Singh Is Bling. 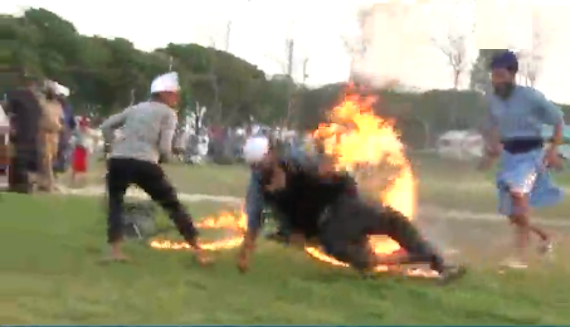 As per a video that was aired on different news channels, Akshay Kumar was supposed to cross a fire loop and he had practised for same as well. But when the shooting commenced, Akshay’s foot got entangled with the loop and his leg and back caught fire.

Singh Is Bling in Controversy:

Akshay Kumar’s upcoming movie “Singh is Bling” seems to be caught into a controversy as Akal Takht Jathedar Gurbachan Singh has raised objections against movie’s promotional song and trailer that were recently released by the film makers.

Giani Gurbachan Singh warned the makers of “Singh is Bling” against misrepresentation and offensive use of Sikh article of faith “Kara”. For More details, see – Singh is Bling movie caught into controversy: Jathedar want filmmakers to remove offensive contents.