Zira: The pro-freedom Sikh group Dal Khalsa and its allies staged a spirited protest against what they call Constitutional wrongs, injustices and denials.

The pro-freedom Sikh groups sought from country’s dispensation to show magnanimity and allow the struggling peoples residing in the peripheral states of the country the ‘right to self determination and right to secede’ in the light of the commitment made by India’s first PM Jawahar Lal Nehru in his speech broadcast on 3rd June 1947.

Dal Khalsa today termed 26th January as a day of deceit and assimilation, as they believe that with the adoption of present Constitution, the Indian State had robbed the Sikhs of their identity, natural resources and foisted Hindu laws on the Sikhs. 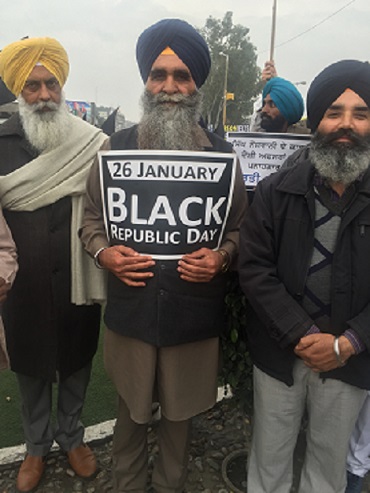 Braving bad weather hundreds of activists of Dal Khalsa, AISSF, SYP were carrying black flags, placards and banners to convey their message.  Party head Advocate Harpal Singh Cheema while addressing the activists said that the right to secede was recognized by the Geneva Convention. Many countries have attained independence through plebiscite. It is not unconstitutional. “We believe the only way forward for Punjab is to attain freedom from Indian yoke”.

Furthermore while justifying their groups protest against Republic day, he termed ‘India as Janus-faced’. While India might have won some brownie points on diplomatic front, what is amply clear is that in the domain of intolerance and rights abuses, India has surpassed all others. He urged the western world not to ignore this aberration of the Indian state at the cost of commercial and economic interest. 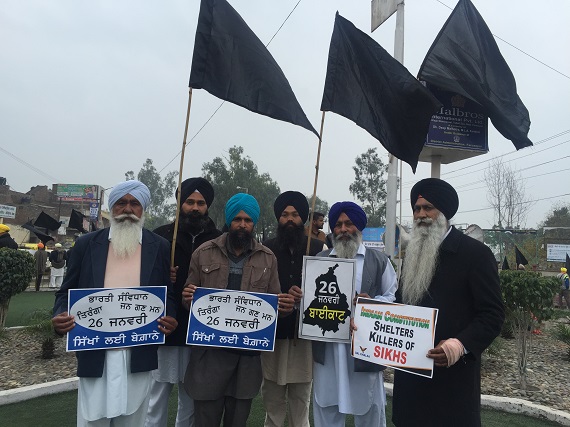 Another View of activists participating in the protests.

Regarding the participation in the electoral process of the country, Dal Khalsa spokesman Kanwar Pal Singh strongly believes that the Indian electoral exercise is an illusion. We will stay away from parliament and assembly elections under the Indian dispensation.

The promises of high profile Hindu leaders of “an area where Sikhs can feel the glow of freedom”,   “Sikhs may use the Kirpan if they are let down”, to language-based states and then to the Rajiv-Longowal sham accord, followed not by implementation but killings of Sikh youth in fake encounters and their enforced disappearances are all part of the shameful track record of the Indian polity vis-à-vis the Sikhs. The litany of broken promises and injustices is endless, he said and added that this long story has rendered us homeless, hapless and hopeless. How does Sikhs see hope in elections?, he argued.

Going further with the program the AISSF head Karnail Singh Peermohammad said the Constitution of India has failed the Sikhs. He blamed that constitutional provisions continue to haunt the Sikhs. He said it was ironic that Sikhs were being (mal)treated has a second class citizen in this Hindu-India.

SYP head Paramjit Singh pointed out that nominating hand-picked individuals at the higher ranking constitutional post was a ploy to deceive the world that the country was “secular” in real sense.