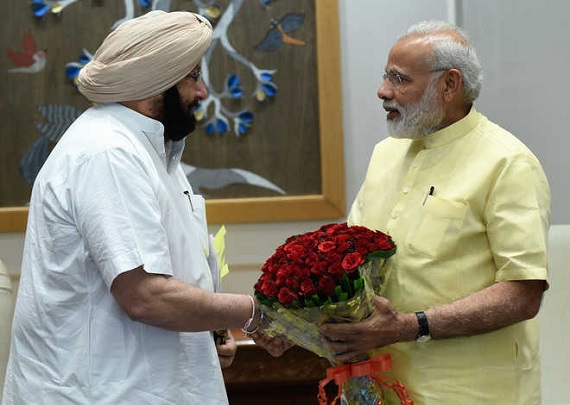 “While Punjab demanded that a tribunal be set up for re-assessment of water in the Ravi-Beas basin, as the state had no water to spare, Haryana urged the Centre to construct the remaining portion of the SYL in Punjab territory at the earliest to carry its share of river waters”, notes a report in the Hindustan Times (HT).

Punjab apprised the Union Government of the critical water situation in the state and stressed its inability to share waters with neighbouring states, including Haryana. It urged the Indian Prime Minister Narendra Modi  to intervene to save the state from an “ecological disaster”, notes The Tribune.

Pointing out that Punjab did not have surplus water and needed every drop of water flowing through its land, the delegation urged the central government to come up with a realistic solution to the problem, keeping the state’s water scarcity in view.

With only 28% of its land canal-irrigated and the rest dependent on tubewells, Punjab was in urgent need of expansion of its canal system to prevent the water crisis in the state from aggravating to devastating levels, the delegation told the Secretary.

The team from Punjab was first to arrive followed by Haryana team which was waiting in the room the adjoining the Secretary’s chamber. While the Haryana team met once, Punjab was given a second hearing.

While interacting with the media Haryana’s Chief Secretary DS Dhesi while sharing the meeting minutes stated that the meeting was a follow-up to an all-party memorandum submitted by Haryana’s political parties to President Pranab Mukherjee, seeking early completion of the remaining part of the controversial SYL canal. He pointed out that all judicial and tribunal rulings had been in favour of Haryana. Karan Avtar Singh said Punjab had urged the central government to intervene and save Punjab from a possible ecological disaster. “The Secretary assured us that Punjab’s interest would be  taken care of, reads a quote from the report published in an English vernacular.

The union secretary was apprised by the Punjab chief secretary of the fact that  only 28 per cent of Punjab’s land was canal-irrigated and that the state was in urgent need of expansion of its canal system to prevent a water crisis. If the controversial SYL was constructed, an estimated 10 lakh acres of land in Punjab would go dry, he further said.

Punjab has been needlessly pushed into a so called ‘dispute’ with the state of Haryana over the sharing of river waters of Ravi and Beas with it. While Haryana is unnecessarily asking for its share of the water which it claims was decided during the Punjab state re-organisation act 1966, the successive Punjab governments have averted to do so giving rationale Haryana being a non-riparian state.  The controversy on SYL is pending in the Supreme Court of India. The case will come up for next hearing on April 27.

The Central Governments of India made ‘extra-legal and extra-constitutional arrangements’ (as these arrangements were made in violation of relevant provisions of the Indian Constitution) to allocate Punjab’s river waters to the afore-mentioned non-riparian states. These arrangements include the so-called agreements of 1955, 1976 (notification), 1981 (Indira Award) and 1986 (Eradi Tribunal). The Indian state used Section 14 of Interstate River Water Dispute Act, 1956 which was not applicable on Punjab rivers as Satluj, Beas or Ravi does not pass through Haryana, Rajasthan or Delhi. Similarly, section 78, 79 and 80 of Punjab Reorganisation Act, 1966 – under which Bhakhra Beas Management Board was constituted and other arrangements to loot the river water of Punjab were made – violate the Constitutional scheme by allowing the Centre’s interference in State’s exclusive subjects.

The PTAA was declared ultra vires of the Constitution by the Supreme court of India on November 10, 2016.