Mohali: Punjab Chief Minister Capt Amarinder Singh and 14 others were reportedly let off by a court in a high-profile corruption and criminal case known as Amritsar Improvement Trust Case. There were total 18 accused in this case, off which 3 have died.

The case was registered by the Punjab Vigilance Bureau (VB) on the recommendation of the Punjab Vidhan Sabha, alleging scam in granting exemption for transferring 32.1 acre prime land of Amritsar Improvement Trust (AIT) to a private developer.

Mohali Special Judge Jaswinder Singh ordered the discharge of the persons named as accused in the case while accepting the closure report filed by the VB. 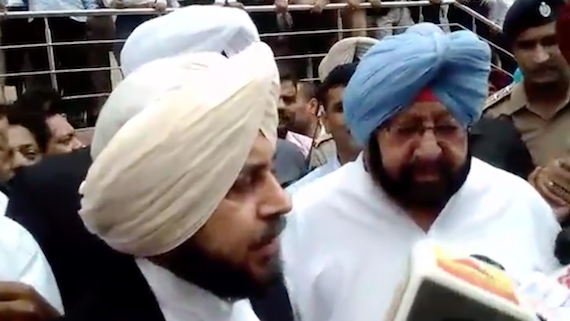 CM Amarinder Singh and others outside Mohali court

In August 2017, the court had rejected the cancellation report for the second time and had directed the vigilance to reinvestigate the matter.

In September 2008, the vigilance had registered a first information report (FIR) under sections 420 (cheating), 467 (forgery of valuable security, will, etc) and 468 (forgery for purpose of cheating), 471 (using a forged document) and 120-B (criminal conspiracy) of the Indian Penal Code.

The accused were also booked under the Prevention of Corruption Act. A challan was filed in February 2009, stating that 18 people were involved in the alleged scam that had caused a loss of Rs 360 crore to the state exchequer. However, charges were never framed against the accused.

In its second round of investigation, conducted following an order of the high court, the bureau had found that there was ‘no undue favour granted to any developer or misuse of power’ and sought cancellation of the FIR against all accused.