Hoshiarpur: Condemning the mob mentality of right wing pseudo patriots, who are harassing and targeting innocent Kashmiris particularly students in UP, Haryana and other parts with vengeance, the Dal Khalsa leaders warned them not to play with fire as it would have far reaching consequences.

Hailing the Sikhs, who have come to the support and lend helping hands to Kashmiri students in Punjab, the Dal Khalsa statement said it is nothing but a reiteration of the healthy Sikh tradition of cooperating with neighbours and people in their need of hour. 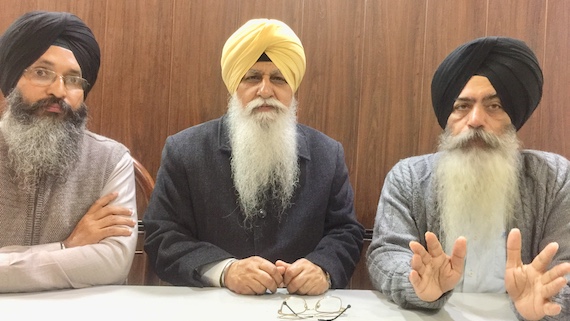 Party leader H S Dhami and spokesperson Kanwarpal Singh hit out at Punjab CM Captain Amarinder Singh for repeating insensible rhetoric. “The CM’s utterances in the Punjab Assembly daring Pak army chief to come on this side of border and aspiring for 82 lives of Pakistanis in lieu of 41 CRPF lives are nothing but childish bravado. The CM has to understand that war mongering at such times in a retaliatory tone will only add fuel to the fire.” “Does the Captain realise that Punjab can become a theatre of war and Punjabis will be the worst-hit, should the Captain’s bravado meet an equal response from the other side of the border?

The leaders of the pro-freedom organization said though we have ideological differences with both Punjabi Ekta Party leader Sukhpal Singh Khaira and Punjab Minister Navjot Singh Sidhu, yet for the first time they had touched the right chord. “Sidhu and Khaira has not toed the state’s official line of blind hatred towards the neighbouring country.” They have applied balm on the hate hysteria that is building up in the country against the people of Kashmir.

Commenting on the Pulwama attack, they said deaths and bloodshed were always a matter of concern and regret.

Observing that the Kashmir has been turned into a war zone, the Dal Khalsa leaders said the lives of freedom fighters and Indian security forces are precious for their respective peoples and nations, and the only way to harbinger peace in the region is to resolve the Kashmir conflict politically and not to deal with it militarily.

The Kashmir dispute is lingering since decades and the people of the valley are dying every day and facing untold misery and yet the government in Delhi, irrespective of the party in power, does not work towards a political resolution of the dispute.