Amrinder & Badal turned back on Sikh cause: Simranjeet Singh Mann

Amritsar: Amidst an ongoing war of words between former Punjab Chief Minister Amarinder Singh and the ruling Shiromani Akali Dal (Badal) on the issue of Khalistan and Amritsar Declaration issue, the Shiromani Akali Dal (Amritsar) president Simranjit Singh Mann criticised Badal and Amarinder for turning their back to the cause of the Sikh nation.

S. Mann said that Capt. Amrinder Singh and Surjit Singh Barnala had signed the Amritsar Declaration in 1994 but they had bowed before pressure from the then Home Minister of India and separated themselves from the declaration. He questioned Amarinder Singh that if there was no mention of Khalistan or the sovereign Sikh state in the Amritsar Declaration, then why he retracted from it? 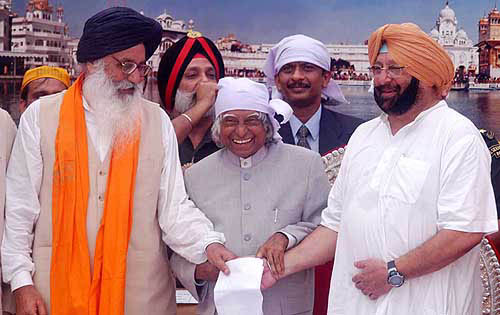 He said that both Amrinder and Badal have turned their backs to the cause of the Sikh nations and people should not trust them.

It may be recalled here that Capt. Amrinder Singh, during his recent rally speeches, raises objections against the Shiromani Akali Dal (Badal) alleging that the ruling party was turning towards the “Panthic Agenda”. In response to Capt. Amarinder Singh’s statement the Badal Dal leaders question him for signing the Amritsar Declaration.