Amrinder is not even ‘Congress Da Captain’: Bhagwant Mann

Chandigarh: Aam Aadmi Party (AAP) today criticized Congress vice-president, Rahul Gandhi for keeping mum on SYL issue and termed it double speak of congress party. Aam Aadmi Party, Campaign Committee head and Sangrur MP, Bhagwant Mann while addressing the press at Sangrur asked Rahul to clear his stand whether he and Congress leadership is with Haryana or Punjab on the issue of SYL. 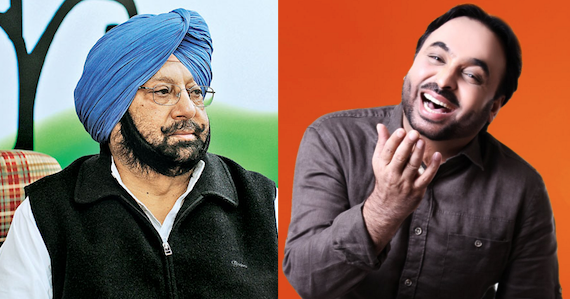 “Even if Rahul is not aware about the importance of this issue, so called ‘Paaniya Da Rakha’, Amrinder should have told him that construction of SYL will left Punjab waterless.” asked Mann. “Actually it was Mrs. Indra Gandhi who initiated the process of SYL and Captain started the construction work from Kapuri. How can they now run away from the history” added Mann.

Commenting on the Prashant Kishor’s election campaign strategy to project Captain Amrinder Singh as ‘Punjab Da Captain’ (Captain of Punjab), Mann said that “He is not even Congress’s Captain yet as Rahul Gandhi has said that it is not confirmed that Amrinder would be the CM candidate in Punjab.” “Earlier Amrinder arm-twisted Rahul Gandhi and forced to declare him Congress chief in Punjab and now it is Rahul’s turn to pay in same currency.” Mann Added.