Chandigarh: A day after a media outlet quoted Punjab CM Amarinder Singh saying that Badals were not responsible for ‘Beadbi’ incidents that took place in Punjab in 2015, the Congress leader has taken a U-turn. Media reports today quote Amarinder Singh saying that he never gave clean chit to Badals in ‘Beadbi’ issue. It may be recalled here that in 2015 incidents of grave beadbi of Guru Granth Sahib had jolted Punjab. At that time SAD (B) government was in power in the state and instead of handling the beadbi cases Badals tried to suppress Sikh protests and bury down the beadbi issue. 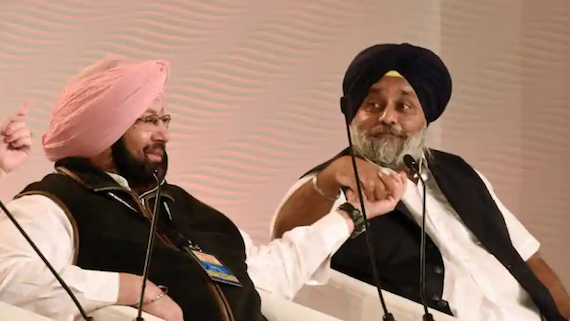 After a newspaper interview with Hindustan Times (HT) on September 24 quoted Amarinder Singh saying as ‘Badals not involved in sacrilege’ and further that there was ‘no timeframe for SIT’ (Special Investigation Team), there was a storm in Punjab politics.

Only only opponents like Aam Aadmi Party (AAP) criticised Amarinder Singh for his statement, even his own party leader and former Punjab Congress chief Partap Singh Bajwa reportedly accused him of acting in complicity with Badals.

Amarinder Singh’s Attempts to Save Dera and Badals:

The police investigation so far has been holding that Dera Sauda Sirsa (DSS) and its followers as those committed the incidents of grave beadbi of Guru Granth Sahib at Burj Jawahar Singh Wala, Bargari, Malke and Gurusar Jalal. But like Badals, Amarinder Singh has been making attempts to save the Dera.

There were reports in media that a Punjab police SIT had tracked the footprints of Dera Sirsa men in beadbi cases back in early 2018 but the SIT was told by ‘high ups’ in Amrinder Singh led Punjab government to stop following the track.

During Punjab state assembly debate on Beadbi issue on August 28, 2018 Amarinder Singh did not utter a word on Dera’s involvement in beadbi issue.

Later, in a media interaction, Amarinder Singh avoided any reference to Dera Sauda Sirsa and blamed Pakistan’s ISI and even the Sikhs of Punjab for beadbi incidents (Read more at – 103 Seconds Interaction on Beadbi Issue Tells It All).

Now, Amarinder Singh has reportedly said that Badals were not responsible beadbi incidents.

Headline To My Interview Was Misleading: Amarinder Singh

A day after his reported interview made him target of political criticism ahead of by-polls in Punjab, Punjab CM maintained yesterday that a misleading headline had given twist to his interview.

“The Badals’ alleged involvement in the case was more than manifest in their hobnobbings with Dera Sacha Sauda ahead of Bargari and their recent desperate attempts to scuttle the probe by influencing the closure report of the CBI…At no point did I say Parkash Singh Badal or his son Sukhbir were not involved in the sacrilege. As is evident from the reported interview itself, all I have said that Badal did not himself go to tear up the holy Sri Guru Granth Shaib. But that does not rule out his involvement in the matter”, a report in Indian Express (Sept. 25) quotes Amarinder Singh as saying.