Amritsar: District police belonging to police station ‘Devision E’ has reportedly arrested Sikh political prisoner Harminder Singh Mintoo in a 2013 case on production warrants. He was lodged at Central Jail in Patiala. The police is now expected to present him before a magistrate and seek his police remand.

Interestingly, in May 2016 Harminder Singh Mintoo had reached in a court in Amritsar to seek directions commanding the police to proceed against him in this case but the police had maintained that he was ‘still in Pakistan’. At that time he was lodged in Maximum Security Jail in Nabha.

An application, dated May 19, 2016, read, “Police authorities are not pursuing the FIR No. 108/2013. It is just necessary and proper that the SHO concerned from E Division PS may kindly be directed to provide the exact and actual status of FIR No. 108/2013 to avoid further harassment to the applicant accused who is lodged in a lock-up since last some years in various false and frivolous criminal cases.” It further read, “At present, the accused is lodged in maximum security jail, Nabha. Applicant accused has doubt that police of PS E Division, Amritsar, knowingly and wilfully and with an ulterior motive to continue kept the accused behind bars intentionally for long period.” 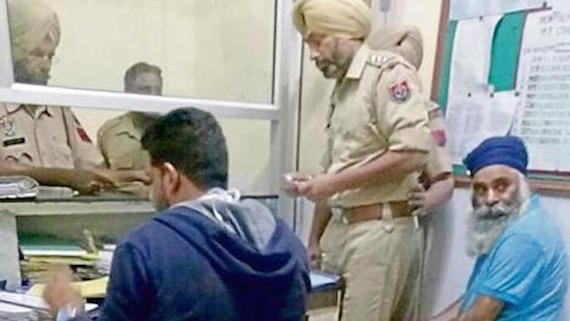 The order passed by court of Ravi Inder Kaur, on July 7, 2016, reads, “Perusal of the record shows that status report has already been received from PS E Division, Amritsar, which is dated June 1, 2016.”

It further reads, “As per the status report, applicant Harminder Singh alias Mintoo, son of Bikram Singh Rio Village Dali, PS Bhogpur, now resident of Pakistan, has already been declared a proclaimed of-fender by the court of MS. Sushma Devi, JMIC Amritsar, vide order, dated 20/02/2014. In view of the status report, papers are ordered to be con-signed to the record room.” The application was disposed off with these words.

It is notable that the Amritsar police belonging to the State Special Operations Cell has arrested one Gurdev Singh Tanda who is brought back from Thailand. The police received his 5 days police remand yesterday.