Amritsar, Punjab: Giving a call for Amritsar shut down on June 6 to mark army attack on Darbar Sahib 31 years ago, the Dal Khalsa today launched a public campaign to create awareness about their objective and mobilize support in their favour.

Youth groups associated with Dal Khalsa today distributed posters and leaflets in the main commercial areas to explain the reasons for the bandh. Activists of Jatha Neeliyan Faujan led by its head Harjinder Singh interacted with masses in the Darbar Sahib premises while members of Sikh Youth of Punjab (SYP) led by its president Paramjit Singh roamed in the various localities urging the people to keep their business as well as educational institutions and shops closed. 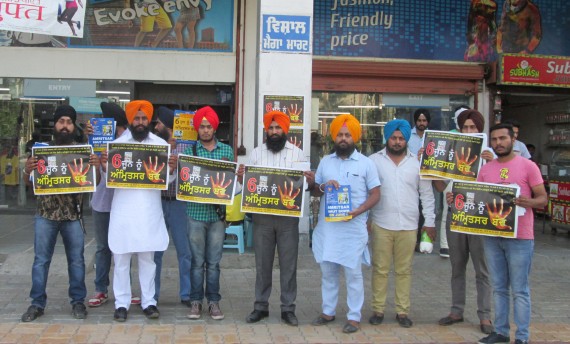 To protest against the sacrilege, killings of innocent pilgrims and loot of manuscripts from Sikh reference library, we have given a call for Amritsar shut down, said party spokesperson Kanwar Pal Singh.

He said the bandh would be peaceful and there would be no disruption in road and rail traffic. He said medical stores would remain functional.

He said their call for bandh had a support of Damdami Taksal (Mehta), Akand Kirtani Jatha, United Akali Dal and SAD (Panch Pardani).

He said to commemorate the army attack code named Operation Blue Star, their youth wing- the SYP would take out a Genocide Remembrance March on 5th evening covering almost all the main streets and colonies. He said the activists would move on motorcycles and open jeeps and vehicles. He said representatives of like-minded groups would also participate in the march.

While reiterating their demand for impartial international investigation into the killings of thousands of pilgrims, SGPC employees and volunteers of Dharam Yudh Morcha, the party senior leader Dr Manjinder Singh Jandi said that the pain of the deadly attack was fresh and the wounds of the attack still simmer.