Ideally, in a democracy, the elections should be contested on the basis of political, economic and cultural policies aimed at welfare of the society. But during the recently held West Bengal elections, the narrative was not based on any of the above policies. It was the poll tactics which shaped the narrative of West Bengal elections. Therefore, it will be more helpful to analyze the outcome of these elections on the basis of tactics used during this entire campaign. Following tactical maneuvers were made during the election campaign:

Religious Polarization: In states where Muslim population is less then 15%, the BJP uses religious polarization to pool the votes of Hindu Upper Caste along with SCs, STs and employed class of BCs and OBCs. Despite considerable social differences between aforesaid sections, BJP able to garner their votes by successfully polarizing them against the Muslims. But the case of West Bengal was different. Here on 65 seats Muslim population is more than 40%. On 30-35 seats Muslim pollution is between 30% to 40%, and further on 30-35 seats Muslim pollution is between 20% to 30%. Therefore, there are about 130 seats in West Bengal where Muslims count for more than 20% and above all some of these seats are totally dominated by Muslims where their pollution is between 60% to 90%. As a result, BJP’s religious polarization strategy backfired on these seats as Muslims rallied behind the TMC to stop BJP from gaining power in West Bengal.

In 2019, the main reason behind BJP’s victory on Muslim dominated Lok Sabha seats of Madha Uttar, Madha Dakshin, Behrampur and Raiganj was division of Muslim votes between TMC, CMP and Congress. 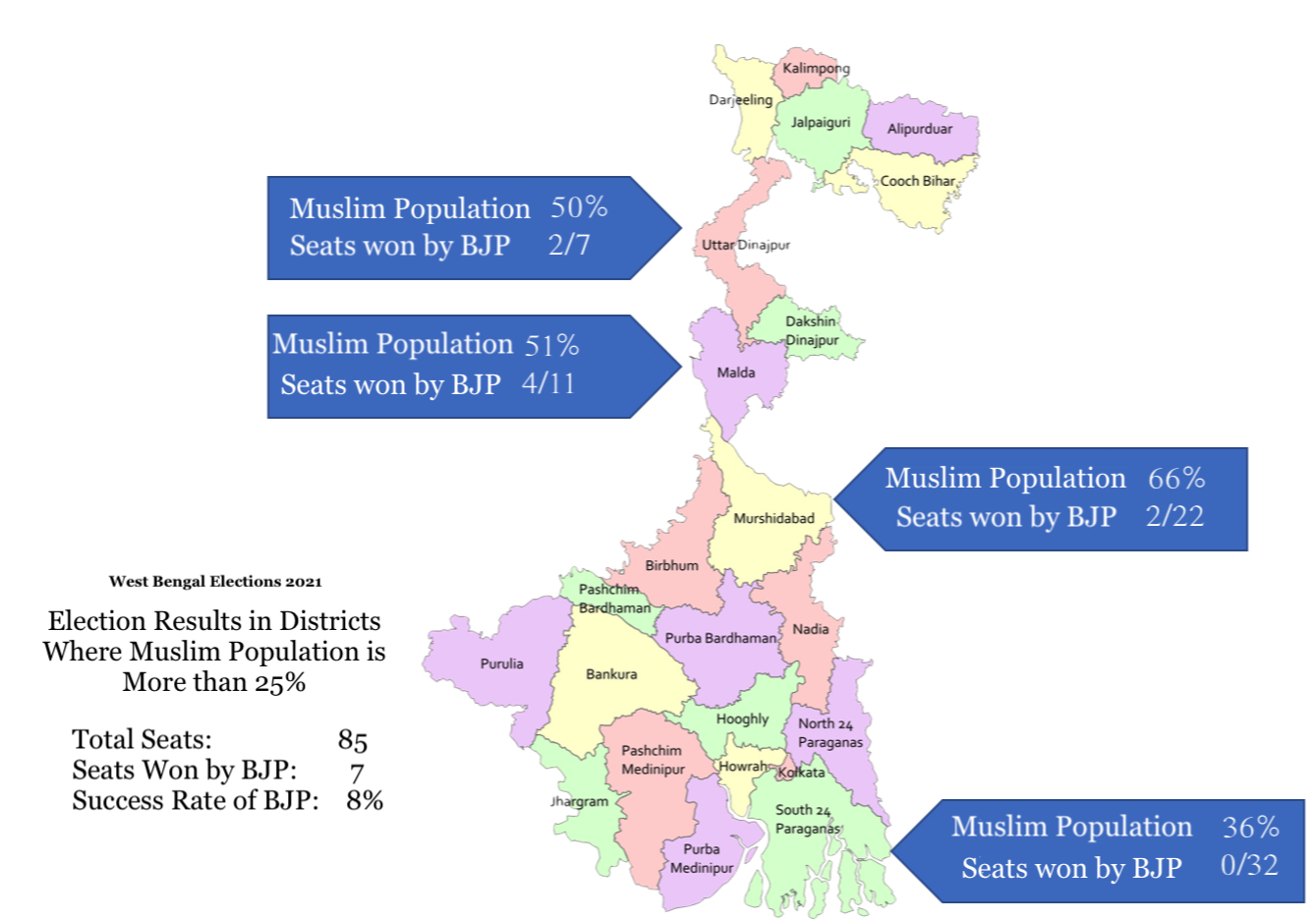 BJP’s success rate in districts with more than 25% Muslim population is just 8%. BJP has won 7 seats out of total 85 seats in these districts. 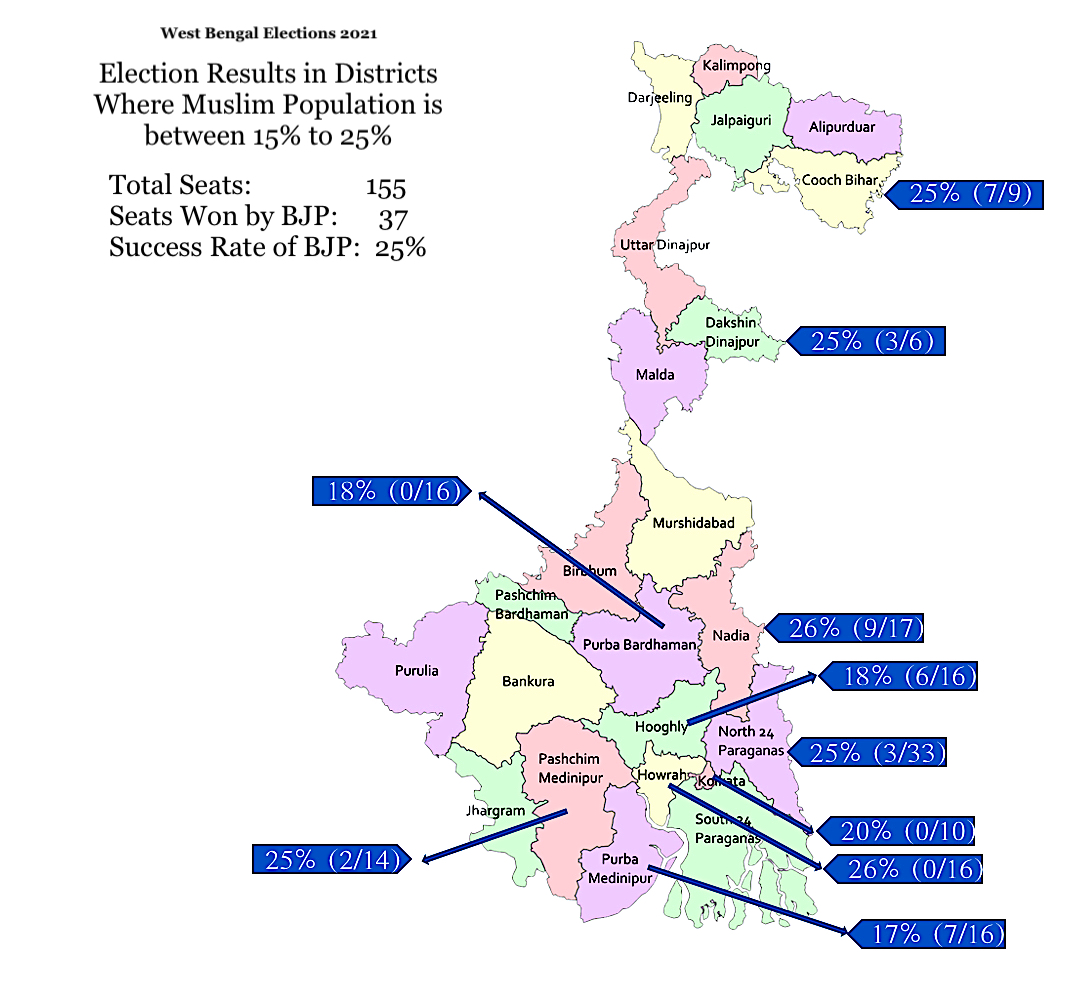 BJP’s success rate in districts with Muslim population between 15% to 25% is 25%. BJP has won 37 seats out of total 155 seats in these districts. 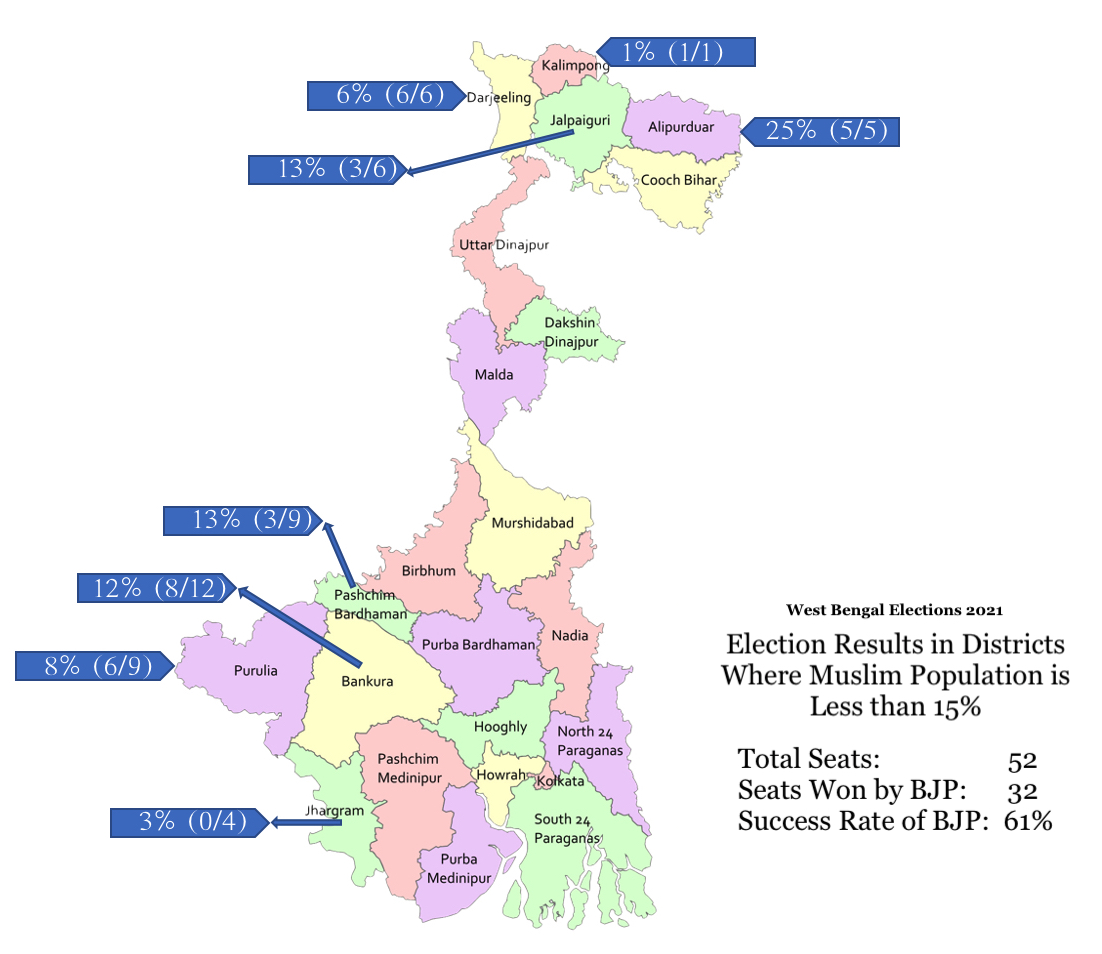 BJP’s success rate in districts with less than 15% Muslim population is 61%. BJP has won 32 seats outs of total 52 seats in these districts.

Reasons behind BJP’s defeat on state assembly segments of seats in 2021 is that Muslims of West Bengal have learnt from the results of 2019 Lok Sabha elections, and secondly BJP’s over stress on religious polarization alerted Muslims and they rallied behind TMC to stop BJP.

In Eastern India, RSS has been working in the social sphere in ST communities since long. This work has shown results in the form of BJP winning seats in Purlia, Bankura and Paschim Bardhman districts that have considerable ST population. For the past few years, the RSS has started working amongst SCs in West Bengal. This work has reflected in election results of BJP’s victory on assembly seats in Nadia and North 24 Pargana districts where there is a considerable SC population. 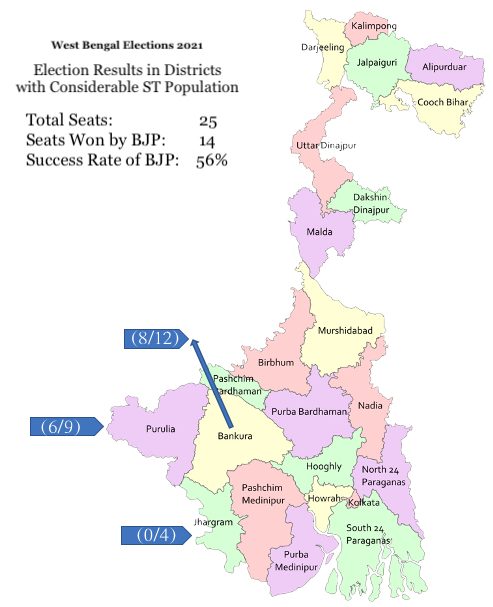 BJP’s success rate in districts with considerable ST population is 56%. BJP has won 14 seats outs of total 25 seats in these districts.

It is notable that caste-based identities have behaved differently in different regions. In Northern districts of West Bengal- Cooch-Bihar, Alibardar, Jalpaiguri and Dargling, which are located in the vicinity of Assam, the Hindu upper class has voted for the BJP, but in Kolkata and areas of other districts that are close to Kolkata, the upper-caste (Bhadarlok) have voted differently (which is analyzed in next point).

Patriotism and Nationalism: BJP uses patriotism and nationalism to gain support and votes of different sections of Hindu society. But this tactic did not work successfully for BJP in the Kotkata and its adjoining area. Kotkata, along with Hoogli, Hawra, Poorab Bardman, and parts of North 24 Parganas and South 24 Parganas that are close to Kotkata can be termed as the ‘Centre of Bangla Culture’. Assembly seats are considerably dense in this area but BJP was able to secure only one seat here. In contrast to the upper-caste section of northern districts, the upper-caste section (Bhadarlok) of this area have voted more in favour of TMC. The reason behind this electoral behavior is that the Bhadarlok, who consider themselves as torch-bearers of the country, have put their Bangla identity above the Indian nationalistic identity. 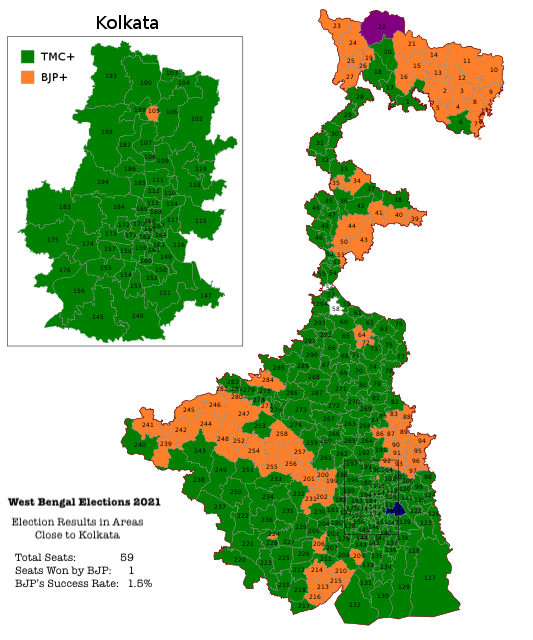 BJP’s success rate in northern districts (that are close to Assam) is 81%.
BJP has won 27 seats outs of total 22 seats in these districts.

Performance of the Past: Earlier Modi-Shah used to propagate their ‘Gujarat Model’ during elections in other regions, but during the past seven years of their rule at the Union level there is no significant success on the economic front (black money, GST, Demonetization). Modi-Shah have faced major setbacks in foreign policy and defense policy (border tensions with China, and Pakistan). Modi government’s administrative inefficiency (covid19 handling) was also further exposed during the elections. Therefore, this time Modi-Shah did not have much to show in terms of performance of the past. But on the other hand, Mamta Bangerjee had done work in the administrative and social sphere by her government, especially during the last two years of her term.

Dream of the Future: BJP used to sell the dream of Digital India to urban class and educated youth of rural areas. But during the past seven years of BJP’s union government, digital India and Make in India did not reflect much on ground. Moreover, West Bengal elections were contested during the times of global economic slowdown, and Indian economy is in a state of turmoil. Besides this, in West Bengal a considerable section of the population is economically poor. Their priority was basic facilities, and slogans like digital India does not mean much to them.

During this election, BJP raised the slogan of ‘Sonar Bangla’ as its dream of future for ‘non-30%’ of West Bengal but while propagating this dream it used Hindutva symbols, slogans and language (Hindi) which did not work. In contrast to this, Mamta Banerjee used Bangla symbols, slogans like joy Bangla and language (Bangla), which proved more impactful.

Dividing Opponent’s Electorate: In response to BJP’s politics of religious polarization Muslims consolidated their votes behind a party/candidate who could defeat BJP. In 2019 Muslims votes were divided between TMC, CPM and Congress as a result BJP had recorded lead in 120 assembly segments. But this time about 80% Muslims have cast their votes for TMC.

Infusing Fear in the Opponent: BJP uses alleged Love Jihad and Gau-Maas (Beef) to infuse fear in Muslim community. It also uses central agencies (CBI, IT, ED etc.) to infuse fear in opponent political leaders. In Uttar Pradesh BJP was able to use these tactics successfully, but it did not work in West Bengal due following reasons,

Perception Creating Skills: It could only be termed as success of Perception creating art of the BJP that with the use of its narrative building power and ground level booth management it was able to project one-sided battle, not only during the campaign but even after the polling, as ‘neck-to-neck fight’ in general perception.