An old photo album of Maharaja Duleep Singh sells for £22,000 at auction in UK

Kent, UK: An old photo album containing pictures of the last Maharaja of the Sikh Empire taken by Prince Albert has sold for £22,000 after it was originally valued at just £200.

The leather-bound album containing 240 photos – four of which are of Maharaja Duleep Singh – was discovered by a house clearer who had won a contract to clear out a property.

It was taken to an auctioneers in Rochester, Kent, along with three other albums, where it was expected to make about £1,000, but surprisingly sold for 22 times that.

Duleep Singh was exiled to Britain at the age of 15 after his four predecessors were all assassinated and he developed an unlikely friendship with Queen Victoria. 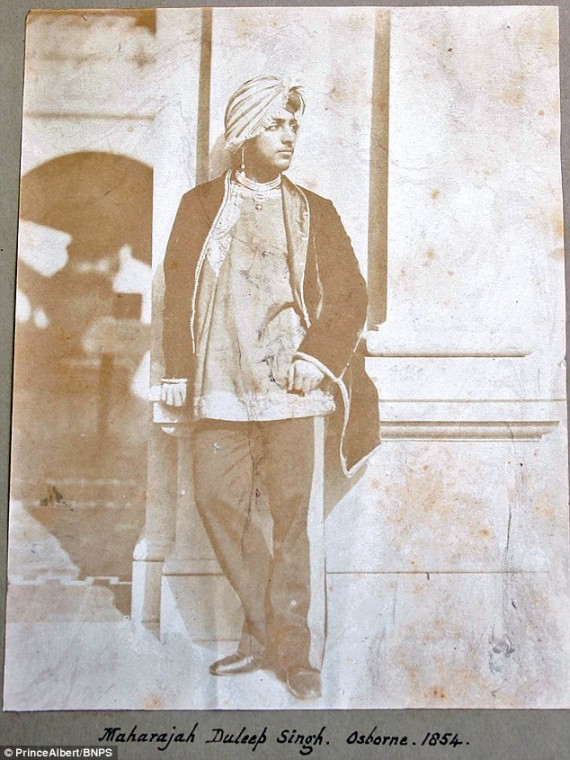 This black and white photograph of Maharajah Duleep Singh outside Osborne House was taken by Prince Albert in 1854. The Royals sparked a friendship with him after he was exiled to Britain when he was 15.

The stoic monarch was said to have written about the young Indian ruler: ‘Those eyes and those teeth are too beautiful.’ She went on to become Godmother to several of his children.

He was invited by the Queen to stay with the Royal family at Osborne House on the Isle of Wight, where she sketched him playing with her children and where Prince Albert photographed him.

The black and white image was taken by the Royal in 1854, when Duleep Singh was just 17, and there was thought to be just one copy of the print, which is currently on display at Osborne House.

That was until the recent discovery by the house clearer, who has decided to remain anonymous. 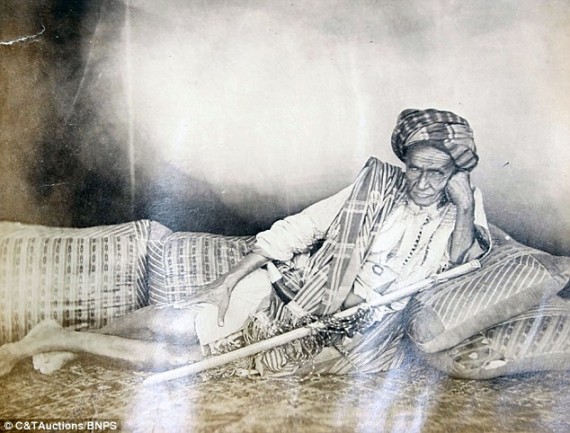 A house clearer came across the photo albums, which included this image, after winning a contract to clear out a property

The leather-bound albums once belonged to Sir John Spencer Login, a naval surgeon who worked for the East Indian Company and who was appointed Duleep Singh’s tutor when he was aged five.

When the British won the Anglo-Sikh War in 1849 and annexed the Punjab, the turban-wearing Maharaja was put into the care of Sir John and exiled to England.

The albums were listed at a pre-sale price of £200 but interest in them quickly took off and fierce bidding broke out in the sales rooms of C&T Auctioneers. 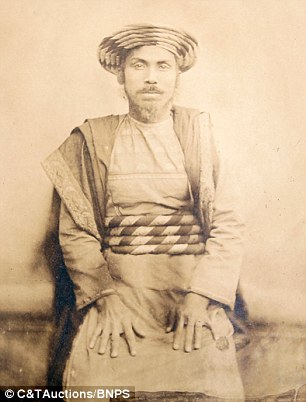 The albums (containing this image of Monooroodeen Dirzie) sold for £22,400 after a pre-sale estimate of £200 was set.

Matthew Tredwen, of the auctioneer group, said: ‘The low estimate was very much a “come and get me” price and we thought the albums could make £1,000.

‘Then as the sale got under way the bidding went crazy with bids on the phone, internet and in the room and it came down to two people in the room.

‘Victorian photography is always very popular anyway but it was really the connection with the Maharaja that made it.

‘He is very much a cult figure in the Sikh world. He was the last ruler in the Sikh Empire and quite an historical figure.

‘The house clearer is very pleased and over the moon. He wasn’t expecting a £19,000 bonus from the job but I suppose that is the nature of the business.’

Duleep Singh was proclaimed Maharaja of the Sikh Empire in 1843 when he was aged five.

After the first Anglo-Sikh war, the British initially retained him as nominal ruler under the tutelage of Sir John. 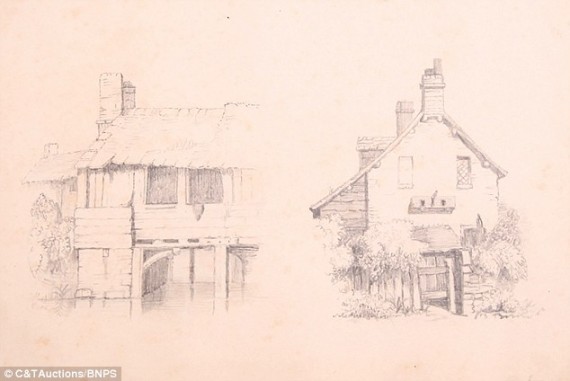 The Maharajah’s first drawing from 1853 was also part of the collection, found by an unidentified house clearer and sold to a British buyer of Indian descent in Rochester, Kent

But he was dethroned and send to Britain in 1854, initially staying at Claridge’s Hotel in London before the East India Company took over a house in Wimbledon, south west London for him.

He was given money by the East India Company on condition that he complied with the will of the British government.

He then lived in Castle Menzies in Perthshire in Scotland where he became known as the Black Prince of Perthshire. One of the photos in the album shows him with the Login family at the castle. 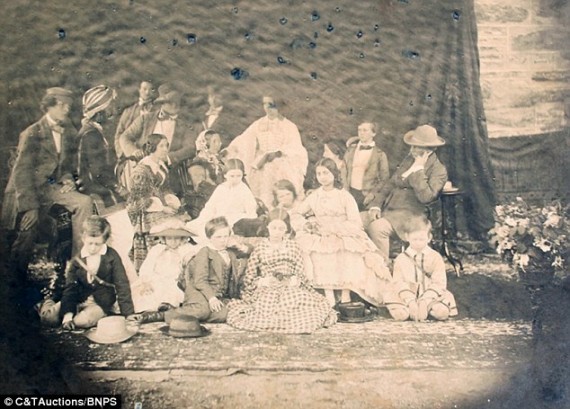 A black and white photogaph of a party in the holidays at Castle Menzies, from July 28, 1855, was also part of the lot

He later bought a 17,000 acre country estate at Elveden in Norfolk where he lived with his wife Maharani Bamba and their six children.

He restored the church, cottages, and school at Elveden and transformed the run-down estate into a thriving game preserve.

In the 1880s he made a bid to return to India against the wishes of the British and he was detained in Aden and returned to Europe. He died in Paris in 1893 aged 55.

His wish for his body to be returned to India was not honoured by the British, for fear of civil unrest and he was buried in Elveden churchyard beside the grave of his wife and youngest son Prince Edward Albert Duleep Singh, who died in 1893 aged four.

PLEASE NOTE: Above content was originally published by MailOnline under title: “An old photograph album with pre-sale estimate of just £200 sells for £22,000 at auction because it includes a picture of the last Maharaja taken by Prince Albert” by Gemma Mullin at source url: http://www.dailymail.co.uk/news/article-3253429/An-old-photograph-album-pre-sale-estimate-just-200-sells-22-000-auction-includes-picture-Maharaja-taken-Prince-Albert.html. It is reproduced as above for the information for readers/visitors of the Sikh Siyasat News. Those interested to check/read above content on source website may visit source (click here).