Chandigarh: “Black Week Against Chitta” – a movement called on over social media was visible on ground in Punjab on Sunday (July 01) as people held peaceful demonstrations across the state condemning government inaction against drugs catastrophe in Punjab. The “Black Week” would last till July 7

This “apolitical” protest movement ‘Chittey De Virodh Vich Kaala Hafta’, with the tagline, Maro Jaan Virodh Karo (either die or speak against drugs) was started after a spate of drug related deaths were reported from across the state in June.

On Sunday concerned people took to streets, held protest marches and demonstrations against drugs. They were holding placards urging people to adopt life not drugs. 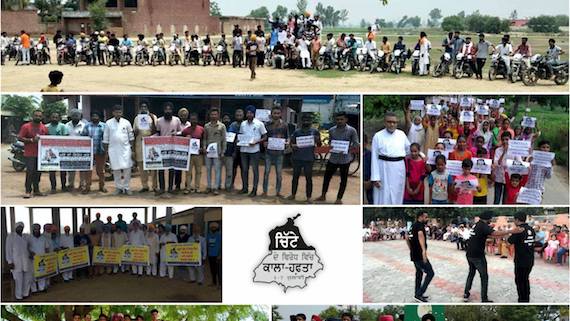 Media reports note that more than two dozen people lost their lives due to drugs. A video that surfaced from Moga on Sunday showed a woman addict saying that she had procured “Chitta” drug from a nearby village. She stated on camera that many households in village Daulewal sold Chitta. She named certain cops who were allegedly abusing her while adding that those cops are also drug addicts.

On the other hand the government is in denial mode. Earlier, Capt. Amarinder Singh had maintained that the recent drugs related deaths can not be attributed to drugs as his government has cut off the drugs supply in the state and addicts died due to injecting de-addition medicine.

Despite admissions from addicts themselves that drugs are easily available in Punjab, Senior Congress leader Sunil Jakhar backed Capt. Amarinder Singh’s statement on Sunday. He too maintained that addicts did not die due to drugs.

The government’s denied has further fuelled anger against it. People have started accusing Capt. Amarinder Singh as a “lied” who had allegedly taken false oath to eradicate drugs from Punjab if voted to power. Recent deaths have revealed that the drugs menace has further spread its deadly clinches across the state.