Another letter, another suo-moto and yet another notice to Badals on Orbit, assets

Chandigarh: Taking up yet another letter sent by an unidentified ‘sufferer’ against Punjab’s ruling Badal family, the Punjab and Haryana High Court issued notice of motion to Punjab government and the Badals. The sender of the letter, that was taken as petition by a division bench comprising Justice Hemant Gupta and Lisa Gill, has reportedly sought CBI probe against the Badal family for accumulating massive wealth at the cost of state.

“Badals (All i.e. PS Badal, Sukhbir Badal and Harsimrat) have amazed (sic) wealth at the cost of state and hence it is a clear cut case to eb inquired by CBI,” reads the letter that came up for hearing on Friday before the High Court. 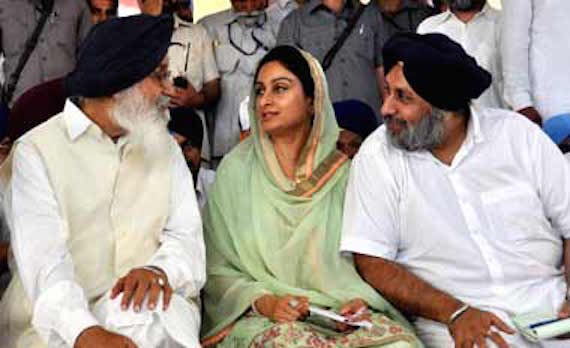 The petitioner who also mentions upcoming Hotel of Sukhbir Badal near Chandigarh seeks jail for Badals while terming their case as ‘more serious’ than that of Jayalalithaa of Tamil Nadu.

The division bench of High Court has put Punjab government on notice. The government is asked to reply by July 30. The bench of Justice Hemant Gupta and Lisa Gill is already hearing the Moga Orbit bus molestation case.