Faridabad: Five days after communal violence broke out at Atali village in Ballabgarh, scared Muslim families are yet to return home.

The sheer brutality of the violence that took place at Atali Village in Ballabhgarh is revealed by the FIR filed in the case. Two thousand people armed with swords, axes, spears, country-made pistols, petrol and gas cylinders had unleashed the attack. The violence lasted less than half an hour, but lives had been changed forever. 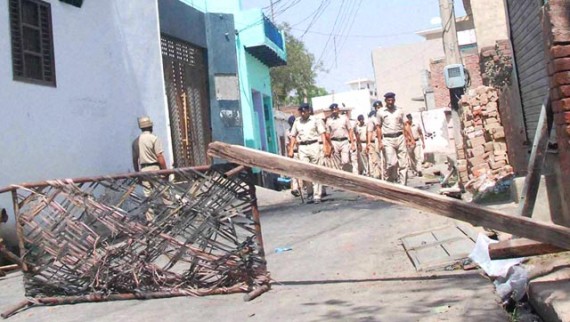 The violence in Atali began Monday evening, the flashpoint of a five-year dispute over the construction of a mosque. The mosque, adjacent to a temple, was torched and the Muslims of the village fled overnight. No arrest has been made yet. Villagers alleged that the local police, which had deployed officers at the dispute site, pulled back their men minutes before the attack.

Meanwhile, the victim families continue to live in the Ballabgarh police station where the administration has made arrangements for food, water and coolers for them. A peace committee held a couple of meetings over the past few days, said officials.

Some houses and a few vehicles belonging to the Muslim community were torched by Hindus in Atali village under the Chhansia police station in Faridabad late on Monday night over a land dispute.

Muslims constructing a Mosque at the land was said to be behind the clashes. Additional deputy commissioner Aditya Dahiya said the administration had made arrangements for the families to stay at two government schools, one in Sector 62 and the other in Atali village but they refused to go there and preferred to stay in the police station.