Arrest me within six months; otherwise I will arrest you after six months”: Kejriwal dares Majithia 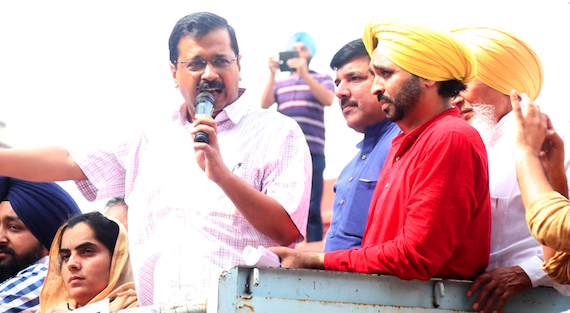 Arvind Kejriwal, who is facing charges of defamation in a criminal complaint filed by Punjab cabinet minister Bikram Majithia was in Amritsar to appear before a local court. Addressing media-persons and AAP supporters Arvind Kejriwal said “I know that false cases are being slapped against AAP volunteers and if they did not spare me as Chief Minister of Delhi, how can they spare you”.

A view of gathering of AAP supporters outside Amritsar Court

“We will not bow down under any such pressure and form the government in Punjab in 2017”, Kejriwal said. He was accompanied by In-charge of AAP’s affairs in Punjab, Sanjay Singh, State Convenor Sucha Singh Chhotepur and AAP MP Bhagwant Mann.

“Badals have turned Punjab, which used to be a flourishing state into hub of drugs to ruin youth. If anyone dares to raise voice against this drug network, they slap false case on him, which is evident of filing a defamation against me”, Kejriwal while referring to hoardings placed by AAP leaders and supporters in Punjab terming Majithia as (alleged) “Drug Lord”.