Arrested on Arrival from Thailand, Gurdev Singh Tanda on Remand with Amritsar Police for 5 Days

Amritsar: The Amritsar police today presented Gurdev Singh Tanda before a local magistrate and procured his police remand for five days. He was reportedly reported by Thailand authorities and was arrested by Amritsar police on his arrival at IGI Airport in Delhi yesterday.

Advocate Jaspal Singh Manjhpur who maintains the list of Sikh political prisoners, told Sikh Siyasat News (SSN) over phone that Gurdev Singh is arrested by the Amritsar police in case FIR no. 21/2010 (State Special Operations Cell, Amritsar), registered under section 121, 121A, 120B IPC, section 25 of Arms Act, sections 4 and 5 of Explosives Act and sections 10, 11, 13, 17 ,18 and 20 of Unlawful Activities Prevention Act. 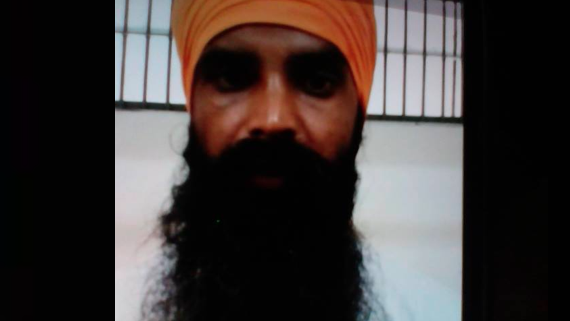 Gurdev Singh was reportedly presented before the court of a JMIC where Advocate Navjit Singh Turna appeared as defence council.

Advocate Jaspal Singh Manjhpur told SSN that three persons were acquitted by the trial court in the case FIR No. 21/2010 (SSOC, Amritsar), while Bakshish Singh alias Baba was convinced in Arms Act and Explosives Act in this case while he was acquitted in IPC and UAPA sections. He was sentenced to 4 years. This case is pending against Harminder Singh Mintoo.

Gurdev Singh’s brother Gurmeet Singh Bagga, who is in Germany, is wanted by the Punjab police in FIR no. 137/08 registered at PS Jagraon.

“After 20 days of registration of that case, the name of my elder brother and myself were also added on the basis of my elder brother’s acquaintance with Gurbhej Singh, who had come from Germany”, Gurdeep Singh reportedly told the Indian Express (IE).

He added that his name was included because his elder brother had sent shoes and jackets for him from Germany through Gurbhej Singh.

“Gurbhej Singh had contacted me on my phone to delivery the shoes and jackets and because of this police arrested me on the basis of call details”, he reportedly added.

“I spent eight months in jail and in 2012 Ludhiana court acquitted me in the case while my elder brother was declared PO because he had never returned to Punjab since 2002”, Gurdeep Singh reportedly told IE while adding that Gurdeep Singh Tanda was not named in Jagraon case.