During the Punjab Assembly election campaign in 2016-17, Arvind Kejriwal had time and again attacked the the Punjab government led by Shiromani Akali Dal (Badal) and particularly Bikram Singh Majithia for being hand in glove with the drug mafia in Punjab. 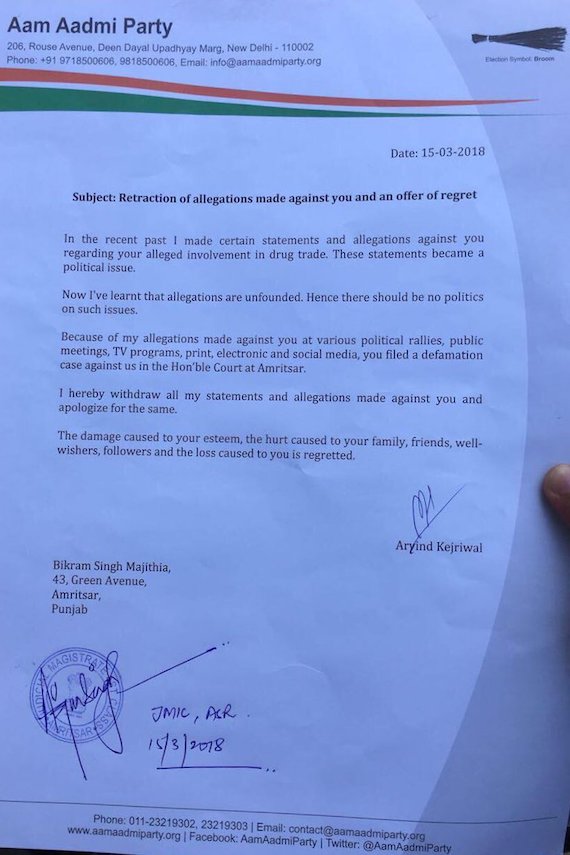 Interestingly, Arvind Kejriwal had vowed to send Majithia to jail if AAP was voted to power in Punjab.

Bikram Majithia tweeted a picture of the apology letter today.

Hours after Majithia flaunted Kejriwal’s apology letter, AAP issued a statement saying, “CM Arvind Kejriwal is facing dozens of civil and criminal cases related to defamation, putting hoardings/posters during election campaigns, violation of Sec 144, public protests etc in Delhi. There are similar cases in other parts of India like Banaras, Amethi, Punjab, Assam, Maharastra, Goa and many other remote places. Most of these cases require personal appearance of the court cases.”

“These cases have been foisted by our political rivals to demotivate us and keep our leadership busy in these legal matters. The decision to amicably sort out all such legal cases is a strategy as devised by the legal team of the party. The political cases in Delhi have been put on fast track, forcing MLAs and ministers to virtually attend cases on a daily basis in courts at Delhi and other states in the country. Contesting court cases is taking toll on already constrained resources of the party and individuals.”