Jodhpur, Rajasthan: A Jodhpur court on Wednesday held Asaram guilty of raping and illegally confining a minor in his ashram in Manai on the outskirts of Jodhpur in year 2013.

The court also held his associates – hostel warden Sharatchandra nd Shilpi, who was the hostel warden in Chhindwara ashram where the victim was studying in a gurukul have also been held guilty.

Asaram’s cook Prakash and his helper Shiva have been let off.

Today’s verdict makes Asaram the second self-styled godman to follow the steps of Gurmeet Ram Rahim who was sent behind bars for 20 years last year for raping sadhvis. 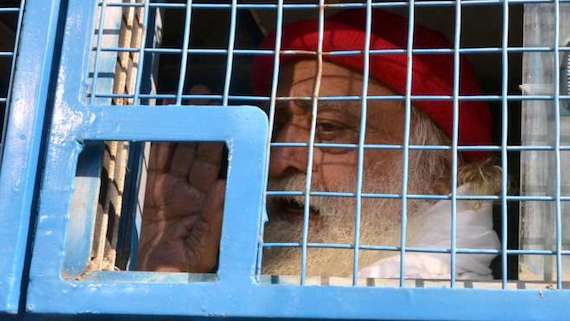 Asaram, who is held guilty of raping to minor by a Jodhpur court

The verdict was pronounced by the judge Madhusudan Sharma from the courtroom in Jodhpur Central jail where Asaram is lodged rather than in his courtroom due to security reasons and in light of massive violence that ensued the conviction of Gurmeet Ram Rahim late last year.

77-year-old Asaram faces another rape case in Surat, Gujarat, where two sisters have accused him and his son Narayan Sai of rape and illegal confinement.

He had been in judicial custody since his arrest and had unsuccessfully moved 12 bail applications.