At PAU Convocation, Punjab Governor Gets Letter Titled ‘To Wake Your Conscience’

Ludhiana: DAYS AFTER Punjab Governor VP Badnore granted pardons to four policemen who were convicted in the 1993 fake encounter case of a Ludhiana man, he was handed a letter titled ‘To wake your conscience’.

A student gave Badnore the letter when he attended the annual convocation of Punjab Agricultural University (PAU) in Ludhiana as chief guest. 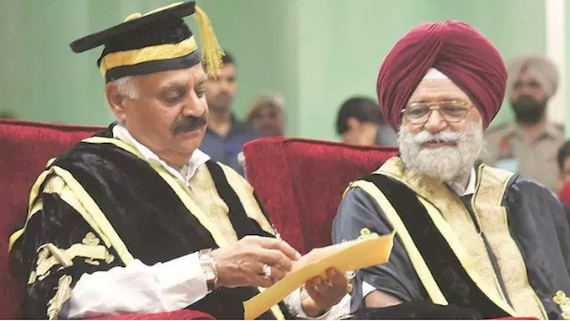 Governor VP Singh Badnore looks at the letter given to him at the PAU convocation in Ludhiana. (Express photo by Gurmeet Singh)

Harsimran Singh Gill, 29, who received his Masters in Journalism & Mass Communication (MJMC) degree, handed over the letter to Badnore in front of PAU vice-chancellor Dr B S Dhillon. Surprised, Badnore took the letter and handed it over to his assistant.

The letter said: “Respected sir, You are already aware of the pardoning granted to the police officers involved in the case of Harjit Singh. You have ashamed the designation, investigation agencies and the citizens as well as the nation by showing this act of yours. Sir, I request you to please awake your conscience so that the people of this nation could believe in the justice system of this country i.e. equal for each and every citizen of our India. Sir you have brought down the justice as well as the faith of citizens of India in the judiciary by your this act of pardoning 4 policemen who were guilty of fake encounter of Harjit Singh. We expect you to recall your orders…” 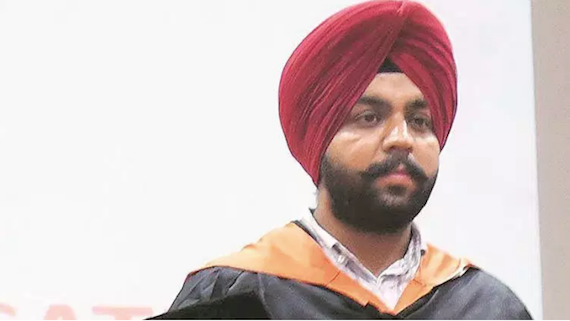 Harsimran Singh Gill, who handed the letter to the Governor | Photo Source: The Indian Express

The Indian Express was the first to report in a June 21 article that four policemen — then Uttar Pradesh Superintendent of Police Ravinder Kumar Singh, Inspector Brij Lal Verma and Constable Onkar Singh and then Punjab Police Inspector Harinder Singh — have been pardoned by the Governor.

The officers were convicted for life by a special CBI court on December 1, 2014, for criminal conspiracy, abduction and murder of Harjit Singh, a resident of Saharan Majra village in Ludhiana district. It was a long wait for justice for the family as the conviction had come 21 years after Harjit was allegedly abducted on October 6, 1993, and was killed on the night of October 12, 1993, in an encounter by UP Police after the police accused him of being involved in a murder case which was subsequently proven false. The CBI too conducted a probe after the victim’s father Mohinder Singh had approached high court. The CBI probe had found that cops murdered Harjit to get “out of turn promotions”.

Speaking to The Indian Express, Harsmiran Singh Gill said that he had planned to not take the degree from the Governor’s hand and refuse it in front of everyone and question him over his decision. “However, due to shortage of time, he did not give me the degree. But when we went on stage for a group picture, I handed over the letter. Had anyone stopped me, I would have questioned them — what if their son was killed and the accused, who were convicted for life, are released just after four years. But no one stopped me and Governor took the letter.”

“Isn’t this a mockery of the system? Isn’t this a mockery of CBI and judiciary? CBI probed and got them convicted and here the Governor doesn’t know how and where to use his powers. Like this, anyone can murder, get pardoned and roam free. He broke the faith of people in our judiciary. Internationally, this is our mockery that we are a country where a court convicts policemen in a fake encounter and a Governor gets them released…It is a matter of injustice.”

Other students supporting Gill’s step, said, “He did nothing wrong. Everyone has the right to express their anger and views if a wrong decision is taken by a public servant. Being students doesn’t mean we can’t express ourselves…”

A total of 344 students were awarded degrees at the PAU convocation.

* Note: Above news was originally published by The Indian Express (IE) under title: “At PAU convocation, Governor gets letter titled ‘To wake your conscience’” by Divya Goyal at source url: https://indianexpress.com/article/india/at-pau-convocation-governor-gets-letter-titled-to-wake-your-conscience-5850023/. Its reproduced as above for the information of readers of the Sikh Siyasat News.