As per media reports all the accused are associated with Damdami Taksal, Mehta Chowk.

The owner of the recovered Tata Safari is Baba Harnam Singh Dhumma, head of the Damdami Taksal, notes The Tribune (TT). 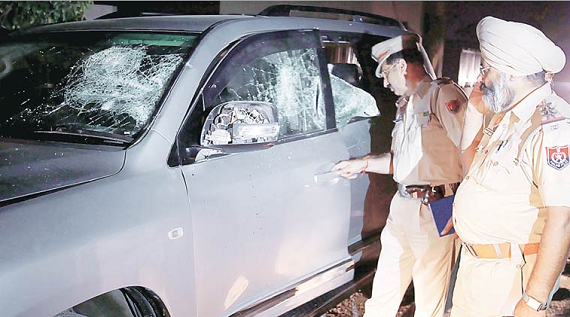 No senior officer was willing to break their silence about the motive behind attack but the investigations so far show that the attack was planned and executed by persons associated with Damdami Taksal, notes The Tribune.

ADCP (Crime) Balkar Singh told media persons that on a tip off, the police installed set up a check point at Krishanpura village and an approaching Tata Safari coming from Bhogpur direction was signaled to stop.

“All the occupants had long beards and were sporting round turbans (Taksali style),” he added.

Officers claimed that the accused were traveling in same vehicle – PB023J 0015- used in the attack and was registered at Fatehgarh Sahib in the name of Harnam Singh resident of Mehta. According to Punjabi Tribune, the police said that only the investigations could reveal that if this Harnam Singh is Baba Harnam Singh Dhumma or some other persons named Harnam Singh.

When contacted, Gurdial Singh, who claimed to be an assistant to Baba Harnam Singh Dhumma said, “The police have illegally arrested our people. The Baba will make everything clear tomorrow and he is busy at a religious programme today”.

The police have arrested four accused previously who have been remanded in police custody for four days.