Ludhaina: The police yesterday arrested six more persons in connection with the attack on Sikh pracharak Bhai Ranjit Singh Dhadrianwale. The recent arrests were made from PAP Chowk in Jalandhar. The police have also impounded an SUV from them. 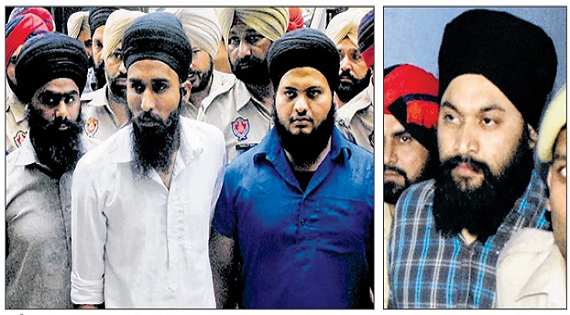 Those arrested have been identified as Gurvinder Singh alias Goldi of Hardoi (UP), Amarjit Singh of Bijnor (UP) and Gurpreet Singh of Faridkot, all residing at Damdami Taksal headquarters, Chowk Mehta in Amritsar; and Gurmeet Singh, Gurnam Singh and Pritam Singh, all of Ferozepur.

Additional Deputy Commissioner of Police (Crime) Balkar Singh maintained that the police have arrested more persons following a tip-off from those already in the custody. The accused were heading towards Anandpur Sahib from Baba Bakala via Jalandhar on a Mahindra Scorpio (DL-3C-AS1928).

Earlier the police had arrested eight persons. All 14 accused were produced before a local court this evening. Four were sent to judicial remand, and the remaining 10 were remanded in police custody for two days.

According to The Tribune (TT), the supporters of the arrested persons entered into a scuffle with photojournalists. Though the police stopped around 30 supporters on the ground floor of the court complex, seven managed to reach near the courtroom. They raised slogans and when the photographers tried to click their pictures, they stopped them and tried to snatch the camera from a photojournalist.