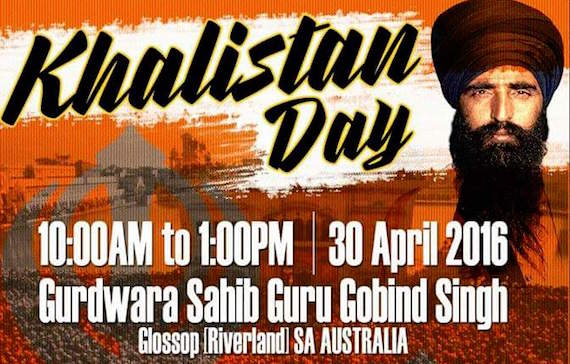 A release issued in this regard states: “Following the Indian military invasion of June 1984, a Sarbat Khalsa was held at Shri Akal Takht Sahib on the 26th January 1986 in which the immense number of attending congregational members unanimously agreed to establish a 5 member committee the guide the entire Sikh Panth. On the 29th April 1986, the 5 member committee declared to the congregation that a separate nation, Khalistan, is to be established, And, on behalf of the Sarbat Khalsa Jathedar Gurdev Singh Kaunkey (the then Jathedar of the Akal Takht Sahib) issued a Hukamnama to the entire Sikh Panth to carry out the declaration”.

“So to celebrate the Declaration of of Khalistan, on the 30th April 2016 from 10 AM to 1 PM there will be a Smagam held at Gurdwara Sahib Guru Gobind Singh GLOSSOP in collaboration with Gurdwara Sarbat Khalsa ADELAIDE in which various local speakers will be presenting their views on historical and current views on Sikh sovereignty to the sangat, followed by a seminar.”