Australian Sikh student under shock after being mocked, attacked for wearing turban

Melbourne: A suspected racial attack on a teenager Sikh student in Melbourne has held him and his family in deep shock. Harjeet Singh, 13, was assaulted, mocked and threatened with being stabbed for wearing a turban.

According to media reports Harjeet Singh was aboard a suburban bus when two boys and a girl, all believed to be in their late teens, assaulted and mocked him.

As per Herald Sun, Harjeet Singh was also allegedly threatened with being stabbed and had his turban pulled by attackers.

Harjeet Singh’s mother Rajinder Kaur Gill said: “My son was crying as he was scared. It’s a horrible thing. I’m afraid if it’s safe for him to travel by bus anymore.” 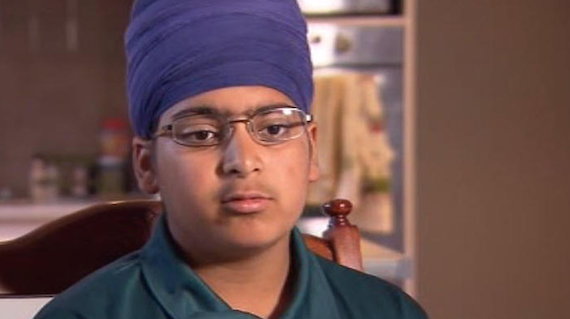 “We are worried as it’s my son today and may be someone else tomorrow. It should not happen to anyone,” she said about the incident that took place on February 23.

The police are looking for the persons involved in the attack.

Harjeet Singh, who attends Doncaster Secondary College in Melbourne, was sitting in the middle row of the bus when the offenders approached from the back seat. The ordeal lasted until Eltham when Harjeet got off the bus early with school friends, also in tears. One of their mothers drove Harjeet home.

“I was so scared. I just froze and when my friends got off the bus, I got off with them,” Harjeet said, adding: “The girl said I had a worthless towel on my head.”

His mother said: “The girl pushed my son’s turban with her elbow. When he moved from his seat to get further away from them, they followed him and sat behind him again. This time, the girl pushed him harder and tried to remove his turban again. My son was scared and he asked them to stop but they laughed at him and said there aren’t that many stabbings in Eltham.”

The Victoria Police spokesman Paul Turner said the police were investigating reports of the assault.

Recently a Sikh woman had hit headlines for raising voice against racial violence against Sikhs in Australia by reciting a poem in a talent show.