Quad Cities, IL: A passenger put a gun to the head of a Sikh Uber driver after demanding to know “which country do you belong to?” and telling him “I hate turban people” on Sunday, January 28th. Nearly three weeks later, local authorities have finally committed to bringing charges no later than Friday, February 16th.

Gurjeet Singh, a father and husband who wears the religiously mandated Sikh turban and beard, has lived in Northwest Illinois for the last three years and serves as the head granthi at his local gurdwara (Sikh house of worship). He faced the assailant while driving for Uber and then notified police the next day about the clear bias-based assault. In the nearly three weeks since, despite repeated outreach by the Sikh Coalition, the armed suspect remains free. On Wednesday, February 14th, Sikh Coalition Legal Director, Amrith Kaur, met with local Sikh community leaders and the Rock Island County Sheriff’s Department, and was informed that the investigation will be handed off to the Rock Island County District Attorney, John McGehee, for his decision on charges by the end of this week.

“We had a worthwhile meeting with Sheriff Gerald Bustos, and are happy to know that this process is finally moving forward. We do still remain concerned that no arrest has been made and the State’s Attorney’s Office has yet to file hate crime charges,” said Sikh Coalition Legal Director, Amrith Kaur. “Mr. Singh and the local Sikh community have the right to feel safe. The reality is that hate crimes are not only attacks on individuals; they affect the entire community. They make all of us less safe, and everybody should be outraged by this.” 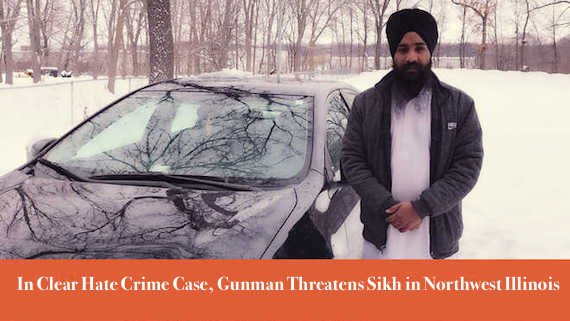 At 10:39 pm on Sunday January 28th, Mr. Singh picked up a caucasian male and female in the alley next to Casey’s Tavern in Moline, IL. Mr. Singh started driving south towards the passengers’ home when the male passenger began asking Mr. Singh questions: “What is your status here?” “Which country do you belong to?” “Do you serve our country or do you serve your country?” Mr. Singh, a legal U.S. resident who speaks limited English, was confused and scared by the questions but attempted to explain that he serves both countries because his parents still live in India. In response, the male passenger got visibly angry and put a gun to Mr. Singh’s head while saying, “I hate turban people; I hate beard people.” Mr. Singh slammed on the brakes and the female passenger forcibly removed the male passenger from the vehicle. She then apologized for the male passenger’s behavior, and instructed Mr. Singh to drop her home and to avoid taking the same route back to eliminate another encounter with the male attacker.

The Rock Island County Sheriff’s Department contends that the investigation had stalled because Uber has not responded to their warrant for the attacker’s Uber account information that was filed on February 6, 2018 – a week after the assault occurred. The request was for Uber to hand over more information about the other rides that the attacker might have taken on that day.

“We respect the investigatory process, however if they are somehow waiting on Uber to confirm that this hate crime happened, then I fear we will be waiting on justice forever in this case,” said Amrith Kaur. “We know this man has a gun, hates people with turbans and beards, and threatened to take our client’s life while he was his Uber passenger. This is hate violence, and any additional Uber records won’t change that fact. ”

The hate-fueled violent threat against Mr. Singh is yet another incident in a long history of bias-based attacks against Sikhs across the country. Sikh Americans, who have been an integral part of the American fabric for 125 years, practice the fifth largest religion in the world. The articles of faith, including the beard and turban, represent equality and justice for all.

“This never should have happened, and I want my community and family to feel safe,” said Mr. Singh. “There must be justice for this hate crime. Authorities should arrest and charge the man who attacked me without further delays because bigotry has no place in our society.