Amritsar/ Chandigarh: The Shiromani Gurdwara Prabhandak Committee (SGPC) president Avtar Singh Makkar has launched ad-war against organizers of November 10 Sarbat Khalsa. In an advertisement published under the name of the SGPC in various newspapers today it is said that the call to organize Sarbat Khalsa on November 10 was allegedly an attempt to destroy the tenets of the Akal Takhat Shaib.

An image of damaged building of the Akal Takhat Sahib (after 6 June 1984 Indian Army attack) is used in the advertisement. The SGPC has raised seven questions in this advertisement. SGPC has maintained that the call for Sarbat Khalsa was (allegedly) an attempt to destroy the “heard earn” peace and communal harmony of the Punjab. The ad says that the Sikh nation want answer from organisers of the Sarbat Khalsa for pushing the nation towards the “darkness”.

A screenshot of the Ad published under SGPC’s name in Nov. 06, 2015 newspapers | Note: This image is reproduced for informational purpose only. Sikh Siyasat News (SSN) does not support or endorse it’s contents 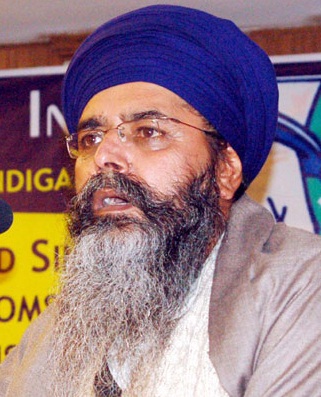 Reacting to the SGPC ad, Bhai Mohkam Singh of United Akali Dal (UAD) has rejected the allegations. He said that the SGPC had indulged in similar ad-campaign to justify the (so-called) pardon to the Dera Sauda Sirsa chief, whereas the decision was rejected by the whole panth and even Jathedars later-on admitted to their fault and declared to withdraw their decision.

UAD chief said that Avtar Singh Makkar should first explain that why the SGPC spent Guru’s Golak on ads in support of pardon to dera chief?

“Has Avtar Singh Makkar added back the money spent form Guru’s Golak on ads supporting pardon to dera chief? If not he should explain it to the Panth that who gave him right to use Sangat’s daswandh for supporting anti-Sikh deras?”, said Bhai Mohkam Singh.

Responding to a query related to the SGPC’s claim that those calling the Sarbat Kahlsa were rejected by the people during last SGPC elections, Mohkam Singh said that Makkar should first explain that what was the present status of the SGPC?

“The SGPC is presently under suspension and only a 15 member committee is appointed as care-taker by the Supreme Court of India, so Avtar Singh Makkar should explain their position of SGPC before raising such questions”, said Mohkam Singh.