Alberta, Canada: Wildfires have destroyed at least 1,600 homes in Alberta, Canada, and forced the mandatory evacuation of 88,000 people — including the entire city of Fort McMurray.

Thousands of evacuees are camped out in nearby towns but stand little chance of returning soon, even if their homes are intact. The city’s gas has been turned off, its power grid is damaged, and the water is undrinkable.

Provincial officials said displaced people would be better off driving to cities such as Calgary, 655 km (410 miles) to the south, where health and social services were better.

According to Vancouver Sun, the Sikh community of Metro Vancouver area plans on Monday to send a tractor-trailer load full of donations to Fort McMurray, Alta., to help victims of the massive wildfire. 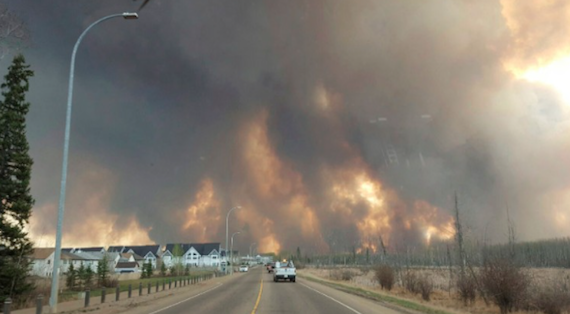 Avtar Singh Gill, who is coordinating the donation drive, said the region’s Sikh Gurdwaras and schools have been busy accepting donations to help those who have lost their homes and personal items due to the wildfire.

The truck will take the items to Edmonton where the goods will then get delivered to those who are displaced from the massive fire that swept through the region last week. The donation drive has been widely broadcast on the ethnic radio stations, and people have come through, said Gill.

“This has been a collective effort from the Sikh community,” he said of the campaign. “This effort is entirely being done based on their need,” he said of the fire victims, many who have yet to find out if their homes are still standing.

Sukhwinder Singh, Director of United Sikhs said, “In this difficult situation, Canada has come together as always and we will overcome this with our resilience. We want to thank the Sikh community of Alberta who have banded together in this effort to help those impacted. The outpour has been amazing and we look forward to provide assistance in the next coming phases of the relief efforts. The needs are changing and we will keep you informed”.

Dharminderjit Singh, spokesperson for the Sri Guru Nanak Sikh Gurdwara, said, “The inferno looks set to become the costliest natural disaster in Canada’s history. One analyst estimated insurance losses could exceed C$9 billion ($7 billion). The Canadian Sikh community has united together to assist in this effort”.

According to a release by the United Sikhs, there are more than 500 firefighters battling the blaze in and around Fort McMurray, with 15 helicopters, 14 air tankers and 88 other pieces of equipment, Alberta officials said. The full extent of the Fort McMurray fire probably hasn’t been realized just yet, and the community will have to rebuild from the ground up when it’s all over.