Amritsar: Reiterating that the Sutlej Yamuna Link (SYL) canal was planned against time-tested and universally accepted Riparian principles with an eye on looting the scarce water resources of Punjab, the Dal Khalsa today released a poster on the contentious SYL highlighting its roots, background, and names of persons who were responsible for continued loot of the state’s only natural resource and those who played the role of saviour to protect it.

The poster claims that first practical call and action to effectively stop the construction of the canal was taken up by militants under the command of Sukhdev Singh Babbar in 1990, followed by the Punjab Termination of Agreements Act by state assembly led by Amarinder Singh government in 2004 and culminating in the de-notification of the canal land by the Parkash Singh Badal led Shiromani Akali Dal-BJP government of the day. 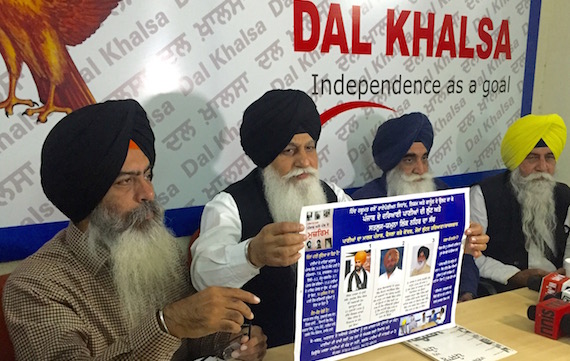 Explaining the contents of the poster at a press conference, party leaders H S Dhami, Kanwar Pal Singh and Adv Harpal Singh Cheema said obviously the motives were quiet different. The militants wanted to genuinely protect the natural resources and economy of Punjab and save agricultural activity which is the life-line of the people of Punjab. They were right in their own way in upholding the sovereign rights of the people to their resources. On the other hand, both the Congress and Badal Dal acted to protect their political and electoral interests. They said the intervention of higher judiciary in this matter was not in good taste.

Suggesting the measures to address the water problem, they said the entire case of Punjab river waters should be handed over to World Bank, clause 5 of Punjab’s Termination of Agreement’s Act 2004 to be abrogated and royalty should be demanded from non-riparian states for using states water till date. Their stress was on seeking royalty from other states if at all Punjab was to give its natural resources to neighbouring states as goodwill gesture. To start with, the leaders of both the groups urged the Delhi Chief Minister Arvind Kejriwal to show magnanimity and pay royalty to Punjab as Delhi was getting 0.2 MAF waters from state’s rivers. “AAP claims to be a party of pro-people. It’s in the race to get political power in Punjab. Let Kejriwal to set the precedent”, said Adv Cheema. To a question, he said they would write to him and if need be might meet Kejriwal to convince him to deliver.

Dismissive of Haryana’s claims, the Dal Khalsa leaders said they were completely spurious and formulated out of spite and jealousy to hurt Punjab’s interests. They said the major chunk of state’s waters was being diverted to Rajasthan & Haryana, which were non-riparian states. Dhami said the Sikh claim about the Punjab’s right to manage its own river water resources is the crux of their economic demands. He said Punjab was in total stagnation. Industry has shut down, agriculture is in doldrums. Unfortunately, everyday there were news of small farmers committing suicides in the last few years”.

They asserted that the question was not of allocation but of ownership. Punjab is owner of its natural resources and no government could divert or give its waters to others forcibly or subverting the law and riparian principles. Referring the glib talks of Badals and Amrinder’s , they said the people of Punjab, particularly the agriculture community was worried that the despite the tall claims of all politicians, more than fifty percent (19 out of 35 MAF ) of Punjab’s waters flows to other non-riparian states.