There has been clear rejection and strong opposition of the announcement of pardon by Sikh organisations and the wider Sikh community. 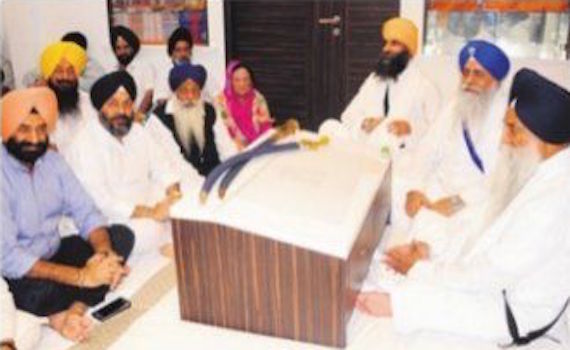 After some SGPC members issued statements in favour of the decision to grant pardon to Gurmeet Ram Rahim, the SGPC, which is under control of the Badal Dal, on Sept. 29 attempted to pass a general house resolution in support of Jathedars’ announcement. The meeting was however attended by around ninety members as against the house strength of 185. Notably SGPC executive committee members who had opposed the Jatehdars’ move stayed away from the meeting. The resolution read by SGPC chief was opposed by some of the members present in the house, including Badal Dal’s own members.

In line with these attempts SGPC chief Avtar Singh Makkar held a meeting with Akal Takhat Jathedar Giani Gurbachan Singh to show his support for Jatehdars’ move. A day after that the Delhi Sikh Gurdwara Management Committee (DSGMC) officials met Giani Gurbachan Singh in Amritsar on Oct. 02. DSGMC president Manjit Singh GK and general secretary Manjinder Singh Sirsa claimed that the Delhi Sikhs were behind their move to extend their support to Takhat Jatehdars’ decision.

He said: “The Sikh traditions allows us to forgive those whosoever comes to forward for apology for the crime”.

When asked by reporters that if Congress party could be pardoned for their role against Sikhs in 1984 he first fumbled but later said that it can be done. “Congress never came forward with a clear mind. If they come forward with a clean soul, pardon can be considered”, he said.

Observers say that Manjit Singh GK’s statement pleading dera chief’s apology is clearly mischievous as in his letter the dera chief had neither admitted to his guilt nor he sought any apology. Moreover, many Sikh organisation of Delhi have already announced to reject the controversial move, which clearly rebuts GK’s claim that DSGMC’s move to support the Jatehdars’ announcement.