Chandigarh: The relationship between the Shiromani Akali Dal (Badal) and the BJP might touch a new low as Indian PM and BJP leader Narendra Modi has cancelled his ‘proposed’ visit to the sacred city of Anandpur Sahib in Punjab.

The Punjab government was told that Narendra Modi will be hosting the President of United Republic of Tanzania on the same day, The Indian Express reported.

This year, June 19 marks the completion of 350 years of the existence of the holy town. The state government would commemorate the historic event from 17-19 June. 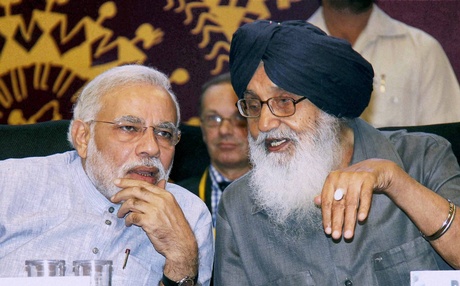 Kamal Sharma also told The Hindustan Times that Modi’s visit was never confirmed neither from the party nor the Prime Minister’s Office.

It was just a proposed visit “Whenever Modi visits a state, the president of the local unit of the party is informed and things move in a different manner and pace than they have for his proposed visit to Anandpur Sahib,” HT quotes Kamal Sharma as saying.

CM Parkash Singh Badal also said that he was not sure whether the PM was coming for the event. “Prime Minister Narendra Modi had accepted my personal invitation to attend the celebrations and had assured me that he would be part of the celebrations at Anandpur Sahib. However, I don’t know, if he is coming as I have been told that the President of another country is coming to Delhi the same day,” HT quoted Badal as saying. Asked to comment on state BJP leaders’ claims that they had not been consulted before inviting Modi, Badal said, “Extending an invite to the Prime Minister of the country is the prerogative of every chief minister.”

Speaking to The Times of India, S K Sandhu, principal secretary to Punjab chief minister told The Times of India, “We have been communicated that the visit by the PM stands cancelled. It is unlikely that there will be any change in that,” , told TOI. Sandhu also said that the India’s Home Minister Rajnath Singh was confirmed as the chief guest at the event. However, Rajnath Singh’s visit has not confirmed yet as because he might have to leave for a foreign visit next week.

Fallout of Punjab Govt’s move on the issue of Sikh Political Prisoners:

The cancellation of Modi’s visit is being seen as the fallout of the crisis between the BJP and SAD over shifting Sikh Political Prisoner Prof. Devinder Pal Singh Bhullar from Tihar to Amritsar jail. Punjab CM Parkash Singh Badal has reportedly assured representatives of Bandi Singhs Rihai Morcha that his government will ensure jail transfers of other Sikh political prisoners to Punjab’s jails who were jailed elsewhere in India.

According to the Punjab BJP president Kamal Sharma the state BJP was not consulted before the decision was taken.

“We will raise the matter with the Chief Minister… Our party is against any move that can disturb law and order in the state,” a news on FirstPoint refers to a PTI report while quoting Kamal Sharma. Although the Badal government said that it did not anticipate any law and order problem.

Notably certain Sikh organizations, including Dal Khalsa and Sikh Youth of Punjab, had expressed their displeasure over Narendra Modi being invited by the Punjab government to attend 350th foundation anniversary of Anandpur Sahib.