“They purposely slept over the notice of MCD for three days and have given safe passage to MCD demolition squad to erase the Piao” said Paramjit Singh Sarna.

He said that after the demolition was concluded, S. Manjit Singh G.K. and Manjinder Singh Sirsa started politicizing this issue. 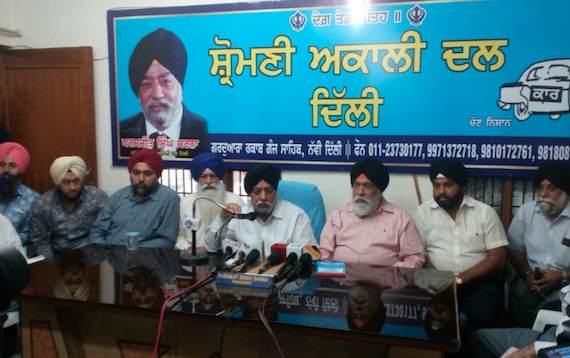 “This nefarious act of G.K. & Sirsa has ashamed the Sikhs all over the world”, Sarna added. Former DSGMC chief said both Manjit Singh G. K. and Manjinder Singh Sirsa has been trying their best efforts to prove Delhi government guilty of demolishing Bhai Mati Dass Chhabil, whereas it was MCD demolition squad that has erased Bhai Mati Dass Chhabil.

“It is unbelievable that MCD demolition squad before coming to demolish the Chhabil has not informed Delhi Sikh Gurdwara Management Committee. It is an open fact known to everyone that MCD is ruled by BJP with whom Badal Dal is in alliance”, said Sarna. Sarna further alleged that Manjit Singh G.K. and Manjinder Singh Sirsa do not bother about sentiments of Sikhs as well as disrespect of historic Gurdwaras in Delhi.

“They can bend to any extent to fulfil the political aspirations of their political master Sukhbir Badal. Their conspiracy of waiting till MCD erase the Piao has exposed their nefarious designs and their intentions towards the most sensitive issue of safety and security of Sikh heritage and historic Gurdwaras” he added.