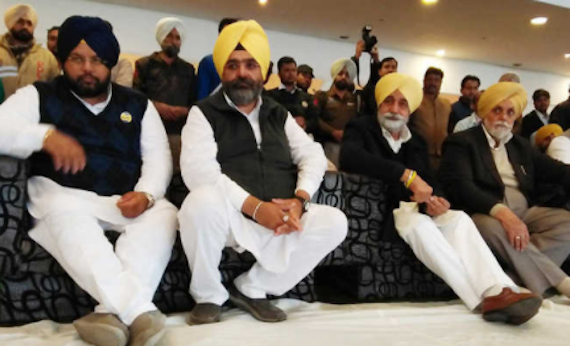 Facing stiff competition from Aam Aadmi Party (AAP) and the Congress in Malwa, the nine Badal Dal candidates assured the dera representatives that they would stand by them in ‘any situation’.

Jeetmohinder Sidhu declared that the SAD (Badal) would organize an event of the controversial dera chief in Punjab. He said that he had made promise before dera chief also and he was repeating it again that they would get dera chief’s event held in Punjab.

Notably, the controversial dera chief is facing criminal charges, including rape and murder in CBI courts. In 2007 Dera chief had attempted to personify himself as Tenth Sikh Guru, Guru Gobind Singh ji during an event at Salabatpura in Bathinda after which a ‘Hukumnama’ was issued against the dera and dera chief by the Akal Takht Sahib and since then Dera chief has not held any event in Punjab.

SAD (Badal)’s move to back the controversial dera has invited severe criticism from the Sikh circles. It is believed that the move was a clear sign of desperation and frustration of the party.