Amritsar: Shiromani Akali Dal (Badal) leaders yesterday intensified their verbal offensive against the organizers of the November 10 Sarbat Khalsa. There are reports that suggest that the government is also creating practical hurdles to fail the gathering called by the Shiromani Akali Dal Amritsar (Mann), the United Akali Dal (UAD) and other Sikh groups. 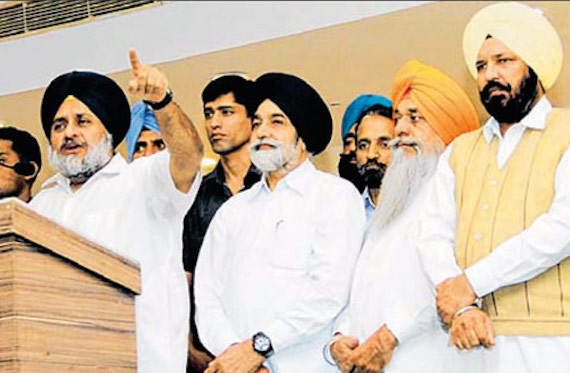 In a similar but separate statement Sukhbir Badal said in Bathinda ‘anti-Panthic’ forces were going to hold the Sarbat Khalsa on November 10.

Notably the Punjab government led by the Shiromani Akali Dal (Badal) has deployed central forces in Punjab, particularly in Tarn Taran and Amritsar districts. As per information the government has unofficially issued instructions to the transporters to not to rent their vehicles to the organizers of the event.

Observers say that the government has lost its credibility and it is defamed for misusing and degrading the Sikh institutions, including the post of Takhat Jathedars and the SGPC. The Badal Dal is also loosing political ground in Punjab in wake of Sikh anger against decision to grant pardon to dera Sauda sirsa chief. The government’s failure to act against culprits of beadbi of Guru Granth Sahib and police repression against peacefully protesting Sikhs evoke outburst of long accumulated Sikh anger against the leadership of the Badal Dal. The Badal Dal leaders are unable to face the people and SAD (B) is organising events to give moral boost to their leaders and workers.

Meanwhile, Sikh organizations have strongly criticised the Badal government’s offensive against the organizers of the 10 November event. Sikh bodies the Dal Khalsa and Akali Dal Panch Pardhani yesterday condemned the SAD (Badal) for terming the event as ‘anti-Panthic’ and said that it was not an ‘anti-Sikh’ or ‘anti-panthic’ gathering (as alleged by the Badal Dal) and people had every right to join the gathering.