Chandigarh: The Aam Aadmi Party (AAP) held a protest march from Phase 7, Mohali to Mohali-Chandigarh border (near sector 51) where AAP activists were stopped by the police. AAP had announced to gherao (surround) the residence of Punjab CM Parkash Singh Badal to protest against alleged Rs. 12,000 crores food scam and government’s failure to prevent farmers’ suicides. 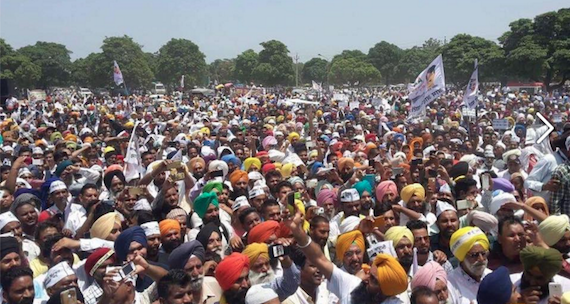 A view of AAP rally near Chandigarh

AAP held a rally at vacant ground near phase 7 traffic lights where various leaders, including Sanjay Singh, Sucha Singh Chhotepur, Kanwar Sandhu, Bhagwant Mann and Gurpreet Ghughi addressed AAP activists and supporters. Then they marched towards Chandigarh but the police prevented them from entering the capital city.

Police had placed heavy barricades to prevent AAP activists from moving towards the Chandigarh. Besides the main road, all other roads were also blocked by the police. There was heavy police deployment near the area. 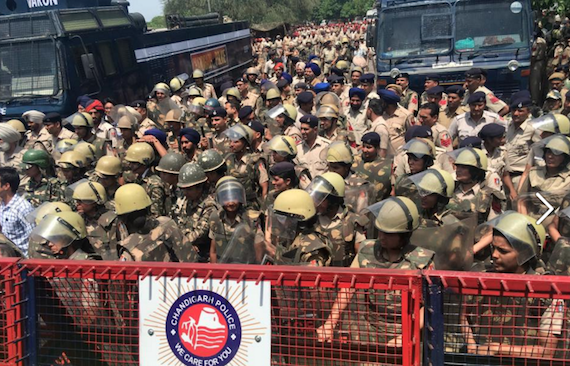 A view of barricade placed at Chandigarh Mohali border

AAP activists raised anti-government slogans and climbed the barricades. As they did not try to cross the barricades, the police did not took any action against them. 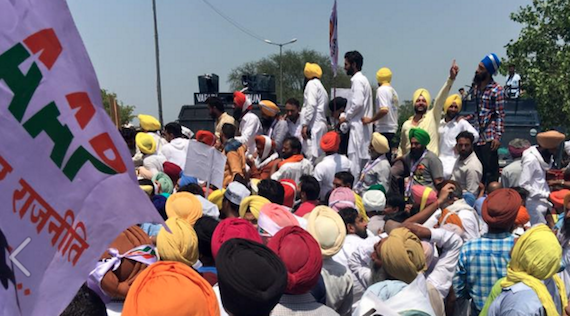 AAP activists climb over the barricades

Sensing the importance of the event, CM Parkash Singh Badal came out of his sector 2 based residence to meet AAP delegation. 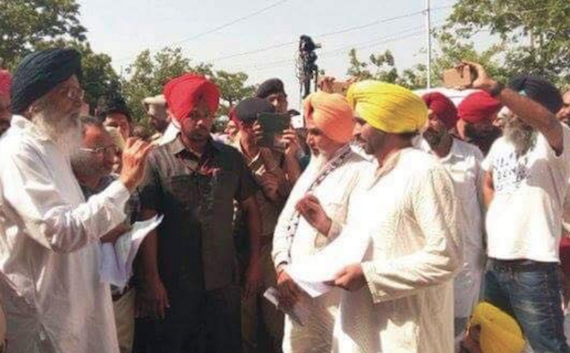 Talking to media persons about their meeting with CM Badal AAP leaders alleged that he was “evasive and non-committal” on various issues like scams, corruption and suicides by farmers in the state.

“He was evasive and non-committal on most issues like the food grain scam, corruption, suicides by farmers and the mafia rule,” senior AAP leader and Punjab affairs incharge Sanjay Singh told media. 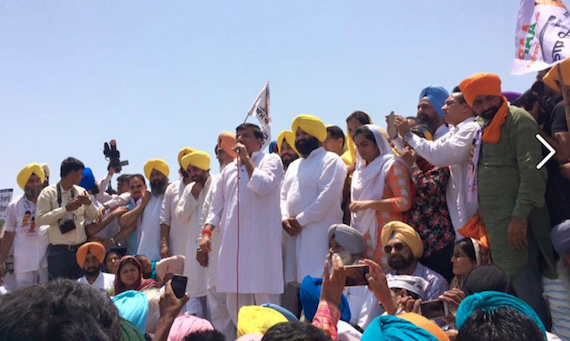 In a written statement issued this evening the Punjab Chief Minister Parkash Singh Badal claimed that the Aam Admi Party’s rally and Gherao programme was “a massive flop show”. He said that the reason for alleged failure of AAP rally was party’s “act of betrayal of Punjab on the river waters issue and because of their politics of fraud, deception and cheap stunts”.

On the other hand AAP leaders maintained that the rally was a massive success and people from “all around the Punjab” defied restrictions imposed by the Punjab government to join the rally.