Badals All Acts of Manoeuvring to Save Their Skin Reflect Their Guilty Consciousness: Dal Khalsa

Chandigarh: In a statement issued yesterday (Aug. 23) the Dal Khalsa reasserted that as so-called pardon to dera sirsa head, sacrilege incident at Bargarhi and firing at Behhbal Kalan and Kotkapura was held when Punjab was under Badals rule, hence the Shriomani Akali Dal led by Badals can’t escape from the responsibilities.

Party spokesperson Kanwar Pal Singh said all acts of manoeuvring by Badals to save their skin reflect their guilty consciousness. He said in the wake of reinstatement of Gaini Gurmukh Singh as head granthi of Akal Takhat the eyebrows were raised as something was cooking up behind the scenes. He said with volte-face by his brother Himmat Singh from his statement given before the Ranjit Singh Commission on Badals role in pardoning rapist and disgraced baba, the cat has come out of the bag. 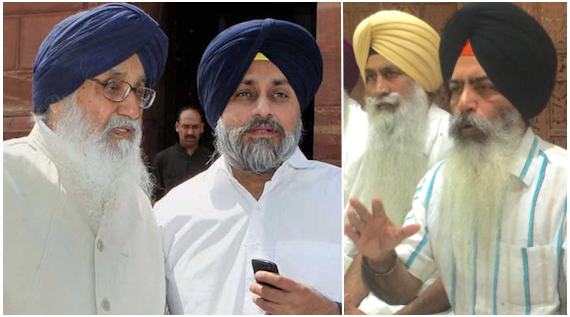 He said Gurmukh Singh’s return to Akal Takhat was part of a deal and added that it clearly shows how Badals continuous to use and misuse religious seats for their vested political interests. He said after belittling the significance of the religious institutions, the Akali politics has touched a new low.

“Gurmukh Singh was part of the five member Takhat jathedar’s who pardoned the rapist baba on the instructions of Badals. With this single act, all five brought disgraced to their highest office. Subsequently, they faced the severest ire from the larger section of the Panth”.

Dal Khalsa leader today attributed the leakage of the commission’s report before it gets tabled in the coming assembly session as part of the larger design to provide Akalis with ample time to manoeuvre the facts.