Amritsar: Firing a salvo against the SAD leadership for creating scare among Hindus by spreading canards”, the Dal Khalsa has asked CM Parkash Singh Badal and Deputy CM Sukhbir Singh Badal to explain why, where and when has the sadbhawna of Punjab got disturbed.

Party spokesperson Kanwar Pal Singh was of the view that Akalis have made fool of the people by organizing four political rallies under the nomenclature of “Sadbhawna. 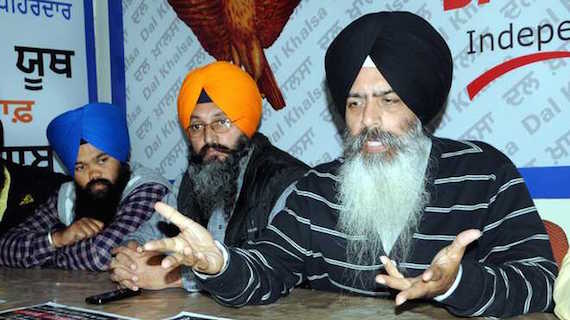 All major communities in Punjab especially Hindus, Muslims and Sikhs had no problem with each other and were living peacefully and brotherly, he observed.
Even as there has been no incident or utterances that could be construed as communal clash or disharmony, Akalis were raising hue and cry only to portray themselves as ‘sole saviour of Punjabis”, he remarked.

Narrating the genesis of intolerance in Punjab, he said it started as an internal community dispute within the realms of the Sikh religion, fast deteriorated into a face-off of all right thinking sections of Sikh society with the Punjab government led by Badals. He said in sharp contrast to the ground reality, it were the Akalis, who through theirs loudmouth have attempted to scare the public especially Hindus by falsely raising the bogey of revival of terrorism.

He said the takhat jathedar’s, at the behest of the Akali government pardoned the pseudo saint Gurmeet Ram Rahim for his blasphemous act. The faulty decision of the clergy triggered the storm that resulted in people’s upsurge. After the infamous sacrilege incidents Sikh sangat came on the streets to convey their pain and anger, but tragedy is that Badals have dubbed them as the ones who were out to disturb so-called sadbhawna.

He said all hell broke loose after the congregation of Sikhs on Nov 10 at village Chabha which saw an assembly of more than a hundred thousand people. Dubbing the whole affair anti-national and seditious, the ruling Badals ordered the police machinery to detain, arrest and put behind bars all activists, religious leaders, social media activists under sedition, preventive detention laws and criminal intimidation.