Patiala: The relics of the three Sikh Guru Sahibs, which were held by Nabha Riasat for about two centuries are being showcased in a specially modified bus. A procession (Yatra) carrying these relics started from Gurdwara Dukhdiwaran Sahib Patiala yesterday (May 06). 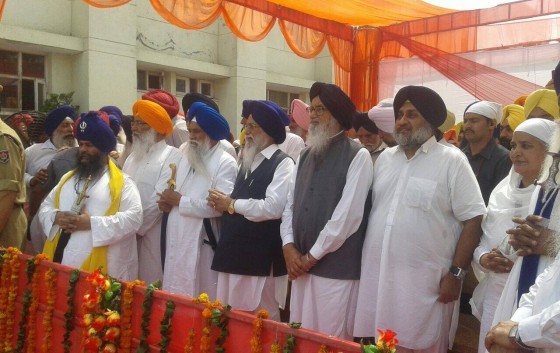 The ceremony was attended by Punjab chief minister Parkash Singh Badal, his son and deputy in government Sukhbir Badal besides various other religious and political leaders of the Badal Dal.

Gopal Singh, a leader of Punjab Sikh Council, has alleged that the politicians have politicised the Yatra. He said that the Yatra is being being used by Punjab’s ruling party as an opportunity to impress voters for upcoming assembly elections.

He said that the relics were kept locked for over 6 years and SGPC ignored all voices of concerns in this regard. Now when general elections are due in Punjab in less than 2 years, the relics are begin showcased to public. He said that it was good that the people would be able to have a look at these historic relics, but the way the yatra is being conducted shows that the SGPC want to extent political milage of the Yatra to ruling Shiromani Akali Dal (Badal).