Moga: Punjab Chief Minister Parkash Singh Badal repeatedly maintained during his speech that he wish not to make a political speech. His speech was more focused on send an appeasement message to Hindus of Punjab. 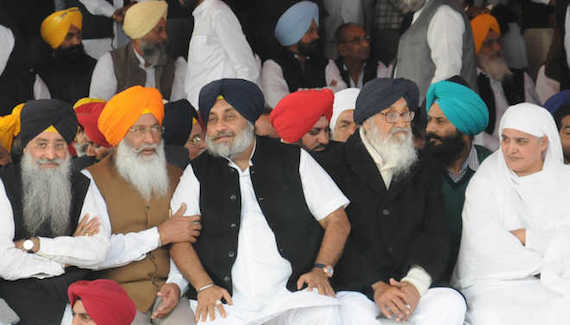 He said that the Shiromani Akali Dal was the mother party of the Punjabis such as the Punjabi (language) is mother-tongue of all the Punjabis. He said that Hindu and Sikhs were “real brothers” having “nail and flesh” relation.

Launching repeated attacks on the Congress party CM said that ‘these forces’ used to throw cow tails in Hindu temples and other objectionable things in Sikh Gurdwaras during 1980s to trigger confrontation between communities.

He extended greetings to Capt. Amarinder Singh for becoming president of Punjab Congress but accused him for registering false cases against himself (Badal), his wife and son during Congress government in Punjab.

Though the rally was said to be bigger than Bathinda rally, independent sources said there were around 35 thousand people who attended the rally.

During his address in case Capt Amarinder Singh did not remove from the party within two days the Congress leaders who had participated in the Sarbat Khalsa at Chabba, it would become obvious that the exercise had been carried out at the behest of Rahul Gandhi.