Patiala, Punjab: Sikh political prisoner Bhai Balwant Singh Rajoana has once again said that President of India should decide the petition moved by Shiromani AkalI Dal (Badal) and Shiromani Gurdwara Prabhandak Committee (SGPC) against his execution without any further delay. He said that he was not concerned about outcome of the decision, but he want the plea to be decided at the earliest possible.

He said that some political people were trying to take advance of his actions.

As per media reports, Balwant Singh Rajoana gave these statements yesterday (September 21), when he was brought to Government Rajindera Hospital for medical checkup. 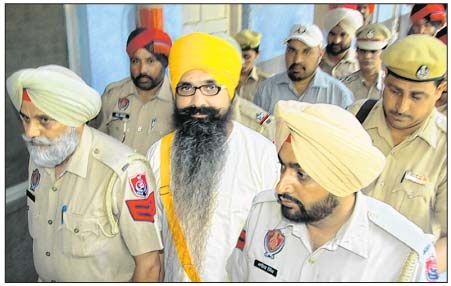 A police party led by DSP Gurdev Singh Dhaliwal had brought his out of the Central Jail, Patiala amidst tight security arrangements.

Doctors who examined Rajoana at Rajinder Hospital said that the number of Rajoana’s spectacles has increased as further loss of eye sight was detected. He had also been suffering from low blood pressure and back-pain.

He was taken back to the Central Jail Patiala after about two hours.

Earlier, on August 22, Balwant Singh Rajoana had conveyed to the President that he would “accept whatever decision he will take, but he won’t bow his head.”