Patiala: Sikh political prisoners Bhai Balwant Singh Rajoana who is facing death penalty in former Punjab chief minister Beant Singh assassination case has written a letter to the President of India. Rajoana who had not contested his case in Indian courts has asked the President of India delay in deciding a petition that was moved by Shiromani Akali Dal (Badal) and Shiromani Gurdwara Prabhandak Committee (SGPC) against his death penalty.

In his seven-page letter, Balwant Singh Rajoana, who is currently lodged at Central Jail Patiala has said that after passing through long legal process of Beant Singh murder case, he was waiting the President to decide over the review petition pending in his office since March 28, 2012. 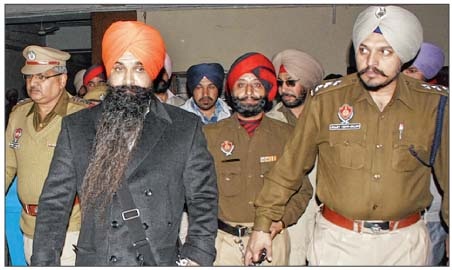 In a letter written on Saturday (August 22), a copy of which was circulated to the media by his sister Kamaldeep Kaur, Balwant SIngh Rajoana conveyed to the President that he would “accept whatever decision he will take, but he won’t bow his head.”

Stating that armed struggle in Punjab was response of Sikhs towards oppression of Sikhs by Indian government, Balwant SIngh Rajoana said that the assassination of CM Beant Singh was necessary and justified given the region of terror that was unleashed by Beant Singh’s government on the civilian Sikh population of Punjab. He argued that Beant Singh’s assassination was executed out of existential conveners of the Sikh nation.

“We didn’t kill Beant Singh for any personal reasons or to create terror in the society. We did it to stop the killings of innocent youth in those days. I had even told the court that I was with Dilawar Singh on August 31, 1995 (the day when Beant Singh was killed)”, Balwant Singh Rajoana wrote in his letter.